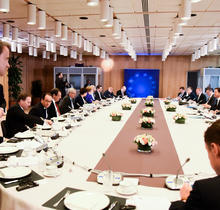 Following the British referendum on 23 June, in which 51.9% of people voted to leave the European Union, social partners across most European countries have commented on the impact that the British exit will have on their countries or members. Their first reactions, in relation to working-life related issues, in particular, have been recorded.

In the run-up to the British referendum on membership of the European Union (EU), social partners across Europe – including, on the trade union side, the Irish Congress of Trade Unions (ICTU) , the Italian Confederation of Workers’ Trade Unions and the General Workers’ Union (UGT) in Spain and, on the employers’ side, the Spanish Confederation of Employer Organisations (CEOE) and the Confederation of Industry of the Czech Republic (SP ČR) – issued statements encouraging British people to vote Remain or expressing their hope for the UK to remain a member of the EU. Read the full article.