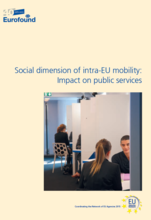 EU mobile citizens from the central and eastern European Member States which joined the EU in 2004 and 2007 (EU10) have a lower take-up of benefits and place a lower burden on public services on the whole than the native population in western European Member States. Overall, EU10 citizens make a positive fiscal contribution to host countries’ economies. This is according to the new report on the ‘Social dimension of intra-EU mobility: Impact on public services', which examines the take-up of benefits and social services of EU10 citizens in nine host countries – Austria, Denmark, Germany, Ireland, Italy, the Netherlands, Spain, Sweden, and the UK. The report analyses the use of various social services and benefits by intra-EU migrants and shows that the ‘welfare magnet’ hypothesis - that EU mobile citizens are coming from new EU Member States to older Member States in order to access benefits - is essentially untrue.

A significantly lower proportion of EU10 EU mobile citizens are accessing social housing and pensions in host countries than the native population. However, the report highlights that there are certain benefits, such as unemployment or in-work benefits, that EU10 citizens claim more than the native population in most of those countries where such data are available. This is mainly due to the fact that migrant labour is concentrated in sectors such as construction, which were adversely impacted by the economic crisis.

Despite the fact that access to certain employment-related benefits was higher in some countries, this appears to be mainly an immediate consequence of the economic crisis, and the gap between the take-up of unemployment benefits by migrant EU10 citizens and the native population may narrow down or even disappear in the foreseeable future.

The report also shows that the concentration of migrants in some areas has produced unexpected challenges in certain sectors, most notably in compulsory education for younger children. This is because the demographic profile of EU10 migrants is often different than the local population and they are more likely to access particular services. In this regard a greater knowledge and awareness is required among authorities and public service providers of the requirements of EU-migrants. Local authorities should also be adequately trained to apply rules correctly in complying with the fundamental rights of EU citizens.

The report highlights that the welfare dependency of EU mobile workers is reduced when there is successful integration, and more can be done to improve the integration of EU10 migrants. In particular, more should be done by Member States in order to support language learning among migrants. This would not only help unemployed EU mobile workers to find new jobs in their host countries, it would also help to ease any local tensions that migratory shifts may have caused, as well as help to further disprove false perceptions of welfare tourism, which are not based on the facts.