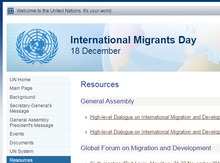 In a new report, Eurofound has examined the impact of intra-EU mobility on public services in nine host countries: Austria, Denmark, Germany, Ireland, Italy, the Netherlands, Spain, Sweden and the UK. The aim of the research was to explore whether there was any evidence supporting the welfare magnet hypothesis, and to find out if if these mobile citizens encountered difficulties of societal inclusion in the host countries, examining the underlying reasons for the challenges they faced.

Some of the arguments voiced in the debate suggest that ‘new’ EU mobile citizens from these 10 countries (the ‘EU10’) are attracted precisely because of better-quality services and easier access to those services in the more affluent western Member States. This is referred to as the ‘welfare magnet’ hypothesis.

Data from host country studies confirmed previous findings that (mostly young) people from the EU10 countries arrive with the aim of working and achieving higher incomes than in their countries of origin. As a consequence, their employment rate is relatively high; in Italy, Ireland and the UK, it is even higher than that of the native population. However, since the ‘new’ EU citizens tend to be employed in those sectors where migrant workers are concentrated – such construction and agriculture – and which are particularly exposed to economic turbulence, they became vulnerable after the crisis: in many countries, their unemployment rate became higher than that of the native population.

The conclusion of the report was that, overall, EU10 citizens’ take-up of welfare benefits and public services in the host countries is lower than that of the native population. This is especially the case in relation to disability and sickness benefits, as well as pensions. The take-up of unemployment benefits or in-work benefits, however, tends to be higher than that of natives in most of those countries where data are available.

Clearly, access to benefits – even for eligible EU10 citizens – can be complicated by difficulties with navigating social welfare systems, sometimes caused by lack of information and language barriers. To address this, the EU could play a more proactive role in helping host countries systematically support language learning. Such an investment could contribute to easing local tensions and improving integration; it could also help offset the negative narratives associated with perceived welfare tourism, which are clearly not evidence-based.