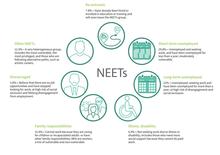 NEETs is a broad category encompassing a heterogeneous population. Disentangling the subgroups within it is essential for a better understanding of their different characteristics and needs, and for tailoring effective policies to reintegrate them into the labour market or education.

Identifying the subgroups also aids in identifying who is most vulnerable to poverty and social exclusion. While individuals in the NEET category often experience multiple disadvantages, including a low level of education, poverty and difficult family backgrounds, the population of NEETs is made up of both vulnerable and non-vulnerable young people who have in common the fact that they are not accumulating human capital through formal channels.

Publication: Living and working in Europe 2016