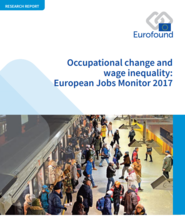 Employment in the EU has returned to the same level as before the global financial crisis: the recovery that began in 2013 has resulted in the net creation of eight million new jobs, with most of this new employment being created in services, as well as a significant increase in the manufacturing sector. This rebound in employment in Europe between 2013 and 2016 has been documented in detail in the sixth annual European Jobs Monitor report, which looks at recent shifts in employment in the EU.

In addition to looking at quantitative shifts in the labour market the report analyses the role that occupations play in structuring European wage inequality. It finds that employment growth since 2013 has been only modestly skewed towards well-paid jobs – there has also been robust growth in low-paid and mid paid jobs, which is consistent with a consumption-led recovery. Europe's economy is also increasingly service based, with eight million jobs being created in the sector since 2011.

The manufacturing sector, significantly impacted by the economic crisis, has also experienced a marked jobs increase, with 1.5 million new jobs since 2013. Most of this increase has been in engineering, professional and management jobs in the top wage quintile; rather than in more traditional, blue collar production roles. There has also been an increase in the share of older workers in many of the faster growing occupations; suggesting that extended working lives and later retirement are as important in explaining recent employment growth as any resurgence of labour market dynamism.