Feelings of insecurity widespread in Europe 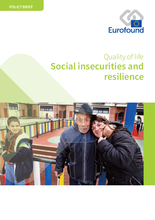 Feelings of insecurity across several dimensions are widespread in the EU, even among those who are materially well-off. Only 1% of the EU population enjoys the highest level of security in the combined areas of personal security and security in housing, healthcare, employment and old-age income.

Eurofound's new policy brief Social insecurities and resilience looks at the results of the latest European Quality of Life Survey and assesses levels of insecurity in five key areas. It identifies the influence of characteristics such as age, gender and economic circumstances; concluding that offsetting social insecurities depends on more than just an individual's resilience and is highly dependent of levels of social and structural support.

The policy brief recognises that Europe is a comparatively prosperous and affluent place to live, that European societies have high levels of social protection, and that people in Europe are, in general, relatively well-off materially compared to other parts of the world. However, feelings of insecurity can pose a risk to quality of life and go beyond current living conditions; involving also perceptions of what the future will bring. The analysis in the policy brief show that low-income groups generally feel most insecure, but insecurity is also widespread among groups who are materially well-off.

When it comes to personal security the policy brief shows that age is an important factor, with over a quarter (27%) of people aged 75 or over feeling personally insecure when outside in their neighbourhood after dark or when alone at home at night. In the area of old-age income security, women are more likely than men to worry that their income in old age will not be adequate - with this particularly the case for separated or divorced women.

The policy brief gives significant food for thought for policy makers. Understanding the insecurities highlighted is important to address the concerns and dissatisfactions of citizens and to adapt policies accordingly. Although the insecurities analysed in the policy brief reflect individual concerns, developing well-functioning institutions and ensuring access to interpersonal and institutional support are paramount to cushioning the negative impact of social insecurities and, ultimately, improving quality of life in Europe.