Suicide among young people a major cause for concern 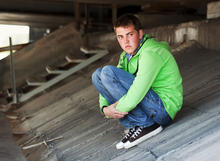 A new study by the World Health Organization (WHO) – Preventing suicide: A global imperative – shows there is a high level of suicides among young people aged 15–29 in high-income countries, accounting for 17.6% of deaths among this age group. Many of Europe’s young people have been experiencing stress and anxiety about work prospects and their future, largely crisis-induced, with many suffering from depression and other mental illnesses. On World Suicide Prevention Day today 10 September, it is important to stress that suicide is a significant social and public health concern.

Of the 54 high-income countries identified in the WHO report, 25 are EU Member States (Bulgaria, Hungary and Romania are the exceptions). Although in almost all regions of the world suicide rates are highest among those aged 70 or over, in some countries they are highest among young people. In fact, at a global level, suicide is the second leading cause of death among 15−29 year-olds, according to the report. It also shows there is a gender difference: in richer countries, three times more men die of suicide than women, but in low- and middle-income countries the ratio is halved at 1.5 men to each woman.

However, as the report points out, it is highly probable that suicide (not to mention suicide attempts) is underreported, as it is a highly sensitive issue, is illegal in some countries or may be misclassified as another cause of death.

In the case of Ireland, for example, suicide is a leading cause of death among young people, particularly young men. With the fifth highest rate of youth suicide in the EU, according to Eurostat data, youth suicide has been associated with increased prevalence of depressive illnesses, substance abuse or life pressures. Among the action areas of the Irish National Strategy for Suicide Prevention 2005–2014 (1 MB PDF) is the ‘promotion of positive mental health, problem solving and coping in the general population’.

Although the evidence suggests many suicides are preventable, ‘suicide is too often a low priority for governments and policymakers’, says the WHO report. Globally, with 8.5% of deaths among young adults caused by suicide, prevention efforts should be prioritised, it says.

The WHO report reviews existing data on suicide and suicide attempts, and assesses what steps are being taken and what should be done at the policy level to raise awareness and increase prevention.

It suggests that national prevention strategies ‘should ensure cooperation between the health and non-health sectors and involve communities and the mass media'. Furthermore, ‘communities, including schools, play a critical role in suicide prevention’, as they are key in providing social support for vulnerable groups and follow-up care, raising awareness of the issue, reducing stigma and supporting families bereaved by suicide.

In 2013, all 28 EU Member States (part of the WHO European Region’s 53 countries), adopted the WHO Mental Health Action Plan 2013−2020. This plan aims to reduce suicide rates by 10% overall by 2020 and among specific groups by age, sex and ethnicity. It calls on Member States to implement suicide prevention strategies incorporating best evidence.

Eurofound’s report on Access to healthcare in times of crisis highlights that in those countries deeply affected by the recession, such as Greece and Ireland, suicide has risen. The report shows the crisis has had a major impact on health and access to healthcare services, increasing the need for certain services, particularly mental healthcare.