Impact of crisis on wage inequality / Eurofound News, May 2015 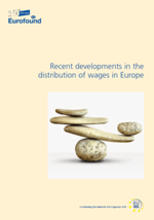 The Great Recession changed the trend of overall EU wage inequality: while wage inequality had been decreasing prior to the start of the crisis, it started to rise as the crisis progressed, as a new report from Eurofound illustrates.

Between 2004 and 2008, overall wage inequality in the EU diminshed. This was due to convergence between European countries, driven by a rapid catching-up by eastern Member States and a stagnation of wages in the two biggest economies – Germany and the UK. After 2008, however, wage inequality increased, mainly as a result of rising inequalities within countries. Only eastern European Member States experienced a decline in wage inequality over the whole period, while other Member States saw increasing overall inequality levels against a background of growing unemployment. In the UK, wage inequality had fallen markedly up to 2008, after which it rose even more sharply up to 2011 – so strongly as to largely explain trends in overall EU inequality. The sector most affected was the financial sector, which experienced a significant reduction in both its average wage levels and in its levels of internal wage inequality. Download Recent developments in the distribution of wages in Europe.