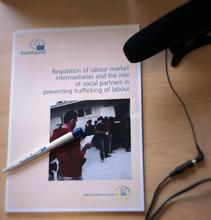 Workers are mobile and can move freely within the EU single market across borders. In order to protect these workers from being exploited and enables businesses to engage in fair competition, the EU has strong legislation in place. But does that mean that trafficking does not exist within the EU’s borders?

The Anti-Trafficking Directive underlines that trafficking is a serious crime and a gross violation of fundamental rights. Germany is the only country which has failed to transpose the Directive. In this context the report finds that monitoring labour market intermediaries, including temporary work agencies, needs to be improved. Tripartite partnerships also need to be strengthened; this is crucial to achieve effective enforcement and prosecution.

To date, a tripartite partnership to tackle trafficking has only been created by the Czech Republic. Targeted policy interventions were developed, cross-border cooperation initiated, the number of inspections was increased, training was broadened, and the compilation of a company blacklist agreed.

Tackling trafficking for labour exploitation is not only an important way to facilitate free and safe mobility of workers and the effective functioning of EU labour markets; it is also an essential tool to boost fair competition. Above all, the EU has a commitment to protect people’s basic human rights. Better monitoring and a dedicated partnership between governments and social partners is essential; essential for ensuring not only freedom from being trafficked and exploited, but also freedom to live and work in dignity.

Ext. Reference:
Listen to Andrea Fromm speak about the new report on preventing the trafficking of labour ​here