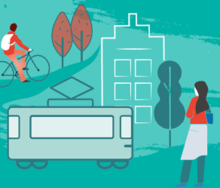 Eurofound’s pan-European data on quality of life and economic developments at regional level is being made available as part of EU Datathon 2020. The EU Datathons are annual open data competitions organised by the Publications Office of the EU to create new value for citizens through innovation and promoting the use of open data produced by the EU institutions.

Eurofound will guide entrants in the competition through the 2016 European Quality of Life Survey (EQLS) and 2019 European Jobs Monitor. The 2016 European Quality of Life Survey interviewed nearly 37,000 people in 33 countries – the (then) 28 EU Member States and 5 candidate countries (Albania, the former Yugoslav Republic of Macedonia, Montenegro, Serbia and Turkey). The European Quality of Life Survey is the EU's premier source of quality of life data and analyses conducted so far have already revealed general improvements in optimism and satisfaction with living standards since 2011 - with overall life satisfaction and happiness levels remaining stable. However, regional analyses have shown significant discrepancies in quality of life in different parts of Europe, a higher quality of life and life satisfaction in capital regions compared to other regions, and a larger proportion of people struggling to make ends meet in rural Europe.

Respondents answered questions on features of their lives, ranging from various aspects of subjective well-being, to living standards and housing conditions, and to responsibilities affecting work–life balance. This included how happy they felt, their optimism about the future, their ability to deal with problems, and their ability to make ends meet.

Respondents were asked about their living conditions, future prospects and perceptions of society. They also responded to questions indicating their levels of trust in institutions such as national governments, the legal system, the EU, and the media.

Eurofound's 2019 European Jobs Monitor underlined the economic determinants of many regional imbalances, by revealing that employment grew by 19% in capital city regions in the EU’s largest Member States between 2002 and 2017, compared to 10-12% in other domestic regions. Overall, capital regions have disproportionately benefitted from the economic ‘services shift’ and changes brought about by globalisation. The data in the report analyses regional shifts in employment over 15 years in Belgium, Germany, UK, France, Italy, Poland, Czechia, Sweden and Spain; 130 regions in total.

Creating an economy that works for people is one of the key priorities of the new European Commission, and one of the main themes of this year's Datathon. By using the data that Eurofound is providing, participating teams are invited to create applications that address underlying policy and societal challenges, create new services for citizens and businesses and provide valuable new insights to participating institutions.