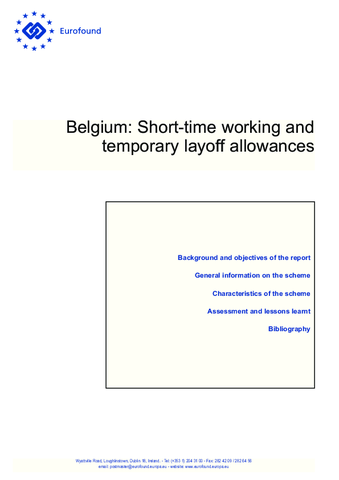 The reduction of working time has played a major role in lessening the impact of lowered production output on employment levels, and this project aims to investigate short-time working and temporary layoff schemes which have been used as a means of avoiding redundancies by many Member States during the recession. Eurofound has conducted an in-depth analysis of schemes available in nine Member States during the recent economic crisis. This is one of the individual country reports describing the Belgian national public support scheme. A comparative analysis of all the individual schemes forms the thematic part of  the ERM Report 2010 – Extending flexicurity – The potential of short-time working schemes (see Related content).
Useful? Interesting? Tell us what you think. Hide comments