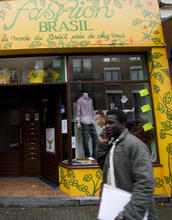 The recent controversy in the UK over government-funded notices on vans threatening illegal immigrants with deportation is just one, national example of the highly politicised debate over migration in Europe. Such anti-immigrant sentiment also colours the policymaking arena, as highlighted in a recently published report by the European Network Against Racism (ENAR).

The ENAR report, How EU policies support or hinder the hiring of migrants in Europe, documents the organisation’s fourth Equal​@work meeting, which took place in December, in Brussels. Eurofound Research Manager Anna Ludwinek participated in the meeting, bringing her experience with Eurofound’s work on integration of migrants to the discussions. She stressed that, while many third-country migrants are overqualified for the jobs they do (given the difficulties in getting professional qualifications recognised), another real problem is unemployment – youth unemployment being a particular issue. Third-country nationals have lower employment rates than native-born residents. However, second-generation migrants are more likely to face unemployment even than first-generation migrants. And the visibility of challenges related to issues around migrants is a real concern: even in anti-poverty circles, Ms Ludwinek noted, migrants may be overlooked, despite the high rates of poverty in migrant communities.

As the ENAR report makes clear, a key issue for migrants working in the EU is the complexity and lack of harmonisation of laws granting permission to work. Ms Ludwinek pointed to the lack of ‘an integrated, coherent approach to EU migration policies’: currently, legislation operates at the Member State level. Three key issues hamper the development of legislation to enable migrants to readily gain good-quality employment.

This situation is problematic enough, but it exists against a backdrop of austerity, limiting both funding to facilitate the cooperation of busineses, trade union representatives, policymakers and activities and dampening the motivation to combat discrimination in employment. Unfortunately, as Ms Ludwinek went on to highlight, NGOs and local stakeholders advocating for migrant rights are not sufficiently engaged in the European-level policymaking process. An important step would be for EU institutions to cooperate with social partners at the local level, since integration largely succeeds (or fails) at this level.

For more information on the topic, see Eurofound's topic page on migration and mobility.