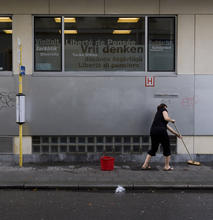 While income is the standard measure of material well-being, or of material strain, it is an imperfect one: non-financial dimensions influence quality of life as much as income. Capturing these other dimensions, then, and understanding their impact, is a vital element in assessing quality of life in Europe.

This was the message that Hans Dubois, Eurofound Research Officer, delivered in a presentation at the fourth congress of the Association of Geographical Societies in Europe (EUGEO) in Rome on 5–7 September. In his presentation, he focused on the role that rural–urban differences play in shaping social inequalities in Europe, and what changes have resulted in this regard from the economic crisis. For instance, people at the bottom of the income scale living in rural areas have had greater difficulties in the past in making ends meet than their urban counterparts. However, between 2007 and 2011 there was a much greater increase in hardship among poorer urban dwellers, reducing the difference considerably.

Drawing on data from Eurofound’s most recent European Quality of Life surveys – in 2007 and 2011 – Mr Dubois outlined how findings from the surveys point to the need for multifaceted policy responses to limit inequalities, rather than focusing solely on income. The survey findings highlight inequalities in terms of health and healthcare, public services, the quality of the local environment, social exclusion, and the perceived quality of society. In 2011, for instance, 5% of those in the top income quartile said that their health was ‘bad’ or ‘very bad’ – unchanged since 2007. By contrast, the figure for those in the bottom income quartile was 17%, having risen from 14% – an increase in health inequality.

Where you live plays a role: people on low incomes in rural areas, and those who are experiencing problems with their local neighbourhood, are more likely to feel that their health is poor. People in rural areas experience greater difficulty in accessing such services as public transport, postal and banking services, and cultural facilities, such as cinemas or theatres (although they are much more satisfied with the quality of their local environment).

The surveys investigated social exclusion through measuring people's agreement with such statements as ‘I feel left out of society’, and ‘Some people look down on me because of my job situation or income’. While there was little change on average across the EU between 2007 and 2011, there was a big increase in the proportions of people agreeing with such sentiments in rural areas in Cyprus and Spain, and in towns and cities in Greece and Malta.

The theme of social inequalities is explored in depth in a forthcoming report from Eurofound, Quality of life in Europe: Social inequalities. This is one of four reports conducting further analysis of the 2011 third European Quality of Life survey. The other three, due to be published over the autumn, will look at quality of society and public services, subjective well-being, and trends in quality of life from 2003 to 2012. More information is available on the quality of life section of the Eurofound website.