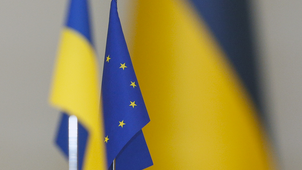 Russia’s invasion of Ukraine has shocked the world and the international community. Cities being destroyed, civilians wounded, innocent lives lost, refugees fleeing to other countries, and economic sanctions have become everyday news as this unprovoked and unlawful war unfolds.

Outside of Ukraine, the crisis is having many socioeconomic consequences in the EU Member States. Refugee flows are already putting an enormous strain on social and housing services, especially those in Ukraine’s neighbouring countries. According to UNHCR, the UN Refugee Agency, by 29 March, more than 4 million Ukrainians had fled across the country’s borders. At the same time, Russian companies in Europe are suffering from the harsh packages of restrictive measures and economic sanctions that EU Member States are adopting to isolate Russia. Moreover, following sanctions and limitations on the import of Russian oil and gas, energy prices and global food prices are hitting record highs, and this affects companies’ levels of production and employment.

The evidence that the crisis is beginning to have an impact on employment in the EU, both positive and negative, is apparent from several cases recorded by Eurofound’s European Restructuring Monitor database since the start of the war in February.

Some of this restructuring is job creation by companies in Ukraine’s neighbouring countries seeking to show their support for refugees from the war.

Civinity, an engineering company that currently employs 1,500 people in Lithuania, announced in February that it would hire 100 Ukrainian refugees in its campaign to recruit 500 new employees. The company will also offer accommodation for the refugees and their families. Positions offered include plumbers, electricians, general construction workers, installers, cleaning service workers and IT specialists.

Cili Pizza, one of the largest pizzeria chains in the Baltics, is creating 100 new jobs for Ukrainians in different Lithuanian regions. The company has also committed itself to provide free food daily to refugees. Currently, Cili Pizza employs 473 people in Lithuania.

Lidl, the German discount retailer, which has a workforce of 2,576 in Lithuania, announced in March the creation of 150 new jobs for Ukrainian refugees in several regions in Lithuania. Different positions will be offered, depending on their qualifications. The company will also give Lidl gift cards to the new employees.

In Poland, Lidl Polska is offering 1,500 new jobs to refugees across the country. It is looking for store and warehouse workers as well as white-collar workers in the company headquarters. Job announcements will be published both in Polish and in Ukrainian. Ukrainian employees will also be offered the opportunity to attend Polish language courses.

Solidarity with Ukrainians is being shown at EU level too. In March, the European Commission launched the European Research Area for Ukraine (ERA4Ukraine) portal: a website where Ukraine-based researchers and researchers fleeing Ukraine can find information about housing and job opportunities in the EU, as well as support in the recognition of their diplomas.

There is also job loss as a result of the EU blocking some Russian banks from various parts of the global financial system. Sberbank Russia, one of the country’s biggest lenders, will leave the European market. The announcement came after the European Central Bank (ECB) ordered the closure of the bank’s European arm, Sberbank Europe, because of big cash outflows following Russia's invasion of Ukraine.

The bank’s unit in Czechia, Sberbank CZ , announced its closure on 28 February following a run on customer deposits, which led to a deterioration in its liquidity. As a result, over 700 employees will lose their jobs across the country. The positions lost include managers, data experts, IT specialists and traditional banking roles. Dismissals will start at the end of the second quarter of 2022. The Czech National Bank has started the process to revoke Sberbank CZ’s licence to operate in Czechia.

One consequence of the war is that energy and food prices are rising dramatically across Europe. As a result, several companies are experiencing an increase in the cost of raw materials and a need to adjust production and employment levels.

Kaisiadoriu Paukstynas, a Lithuanian company in the food-manufacturing sector, is cutting 200 jobs in its farm in Kaišiadorys, where 629 people are employed. According to the management, the farm is currently paying twice as much for electricity and five times as much for gas compared to the same period in 2021. Moreover, the price of wheat feed for poultry has increased from €150 to around €420 per tonne. Current production levels are no longer sustainable, and the company is to cut production by one-fifth.

These are just a few examples of the socioeconomic consequences of Russia’s war in Ukraine. Many European companies are reacting to the Ukrainian crisis by supporting refugees and offering them job opportunities, allowing them at least temporarily to settle into a new life outside their home country and integrate in a new one. However, companies will also have to face the repercussions on employment due to economic sanctions, disrupted supply chains and resource flows, and their inevitable inflationary consequences. In this complex scenario, the European Restructuring Monitor will continue to capture and monitor the broader economic effect of the war and its impact on restructuring in all of Europe.