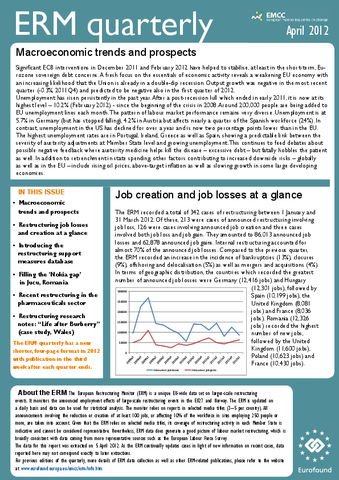 Significant ECB interventions in December 2011 and February 2012 have helped to stabilise, at least in the short-term, Eurozone sovereign debt concerns. A fresh focus on the essentials of economic activity reveals a weakening EU economy with an increasing likelihood that the Union is already in a double-dip recession. The first issue for 2012 includes: macroeconomic trends and prospects; job creation and job losses at a glance (1/1/-31/3/2012); sectoral distribution of job losses/job gains, and top five cases; filling the 'Nokia gap' in Jucu, Romania; restructuring support measures under the spotlight; - restructuring in the pharmaceutical sector; life and work after the offshoring of a clothing factory in the Welsh valleys.