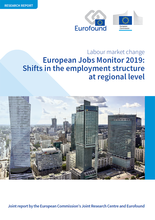 Employment grew by 19% in capital city regions in the EU’s largest Member States between 2002 and 2017, compared to 10-12% in other domestic regions. This employment growth has been reflected in the growing national economic weight of capital regions, with cities such as London, Paris and Stockholm accounting for 30% and more of the GDP of their respective countries. These findings from the 2019 European Jobs Monitor which analyses shifts in the employment structure in 130 regions in nine larger Member States (accounting for nearly four out of five EU workers), confirm that, while the EU has been successful in reducing economic disparities between Member States, inequalities between regions within countries have increased in recent years.

Capital city regions in particular have benefitted from the ‘services shift’ and from globalisation, generating a disproportionate share of new well-paid employment across the EU. Just over 70% of employment is now in services, but this share rises to 85% and above in many capital regions – with a skew in particular to highly paid sectors such as financial services, professional services and information and communication.

At the same time, capital city regions also appear to be a significant vector of employment polarisation, with high shares of well-paid, high-skilled employment in knowledge-intensive services accompanied by increasing share of low-paid employment.

Looking at measures that can help to create more regionally balanced employment growth within Member States, the report highlights that the increasingly digital and location-independent nature of much work, enabled by universal high-quality broadband availability, can help to redress the situation. However, it also observes that good-quality employment - which could, in principle, often be carried out remotely or virtually – has in practice tended to cluster more and not less in large, urban, and often capital city, regions.

The report also notes that regional mobility has traditionally been seen as an antidote to unbalanced regional growth, with individuals motivated to transfer from declining regions to higher growth ones. Although this can be an important safety-valve, it can also run the risk of making unfavoured regions even more ‘left behind’, with depleted human capital.

The need for labour market and economic integration is just as great for regions as individuals, notably those regions beset by industrial decline or depopulation. As recent voting data in many countries shows, neglected regions can wield more power electorally as their economies weaken. Balanced and sustainable employment and economic growth across regions remains a challenge not just for the Member States but for the EU as a whole.