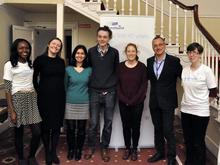 On 27 November, young representatives from the Irish Development Education Association (IDEA) visited Eurofound. This was an opportunity for Eurofound to showcase key findings of recent research on the social inclusion of young people and youth employment in Europe, as well as for IDEA to present the results of their research project on ‘Challenging the crisis’. IDEA was set up to promote, support and enhance development education in Ireland and internationally.

Research on the Social inclusion of young people shows that young people are the group at highest risk of poverty and social exclusion in the EU. The proportion of young people living with their parents has risen since the crisis, and the rate of those experiencing serious deprivation has increased.

The EU Youth Strategy 2010–2018 aims to create more and equal opportunities for all young people, in education and the labour market, promoting active citizenship, social inclusion and solidarity. This can be enhanced by challenging negative attitudes of professionals towards young people and focusing on opportunities for social and civic engagement.

Research on young people not in employment, education or training (NEETs) finds that spending a protracted period outside the labour market and education may lead to negative social conditions, resulting in a cost for both the individual and society. Young NEETs scored much lower than other age categories for trust in institutions, participation and interest in politics, and social participation.

The EU Youth Guarantee aims to improve the situation for young people, for example through information, counselling and guidance services, outreach programmes, assisting school-to-work transitions, training and work experience placements, vocational education and training and apprenticeships, as well as fostering youth entrepreneurship. But more attention needs to be focused on those young people who are harder to reach and less job-ready.

Representatives from IDEA’s Young Global Advocates network presented initial results of the EU-funded project ‘Challenging the crisis’, a three-year development education project that runs until April 2016. It is led by IDEA, with partners in five of the other EU Member States most affected by the economic and financial crisis – Greece, Italy, Portugal, Slovenia and Spain.

The survey was led by young people aged 18–30 and carried out among around 2,300 young adults across the six countries on attitudes towards international development and social justice. In light of the high unemployment levels among young people and the risk of social exclusion, the project aims to raise awareness of and support for international sustainable development policies, despite austerity measures at home.

Results show a general lack of confidence among young people in governing bodies and institutions both at national and global level. Young people believe corruption and poor governance are among the main causes of poverty locally and globally. They consider that governments and non-governmental organisations have a large role to play in turning this situation around. Half of young people believe that development aid should increase and 95% want to bring about change in support of global justice. However, youth engagement in civil society activities was found to be quite low.

Now in the third year of the project, the Young Global Advocates have launched a European-wide campaign on Social and Solidarity Economy (SSE), which is an alternative way of understanding the economy, putting people and the environment at the centre. SSE includes traditional forms of cooperatives and mutual associations, fair trade organisations, associations of informal sector workers, social enterprises, and community currency and alternative finance schemes – such as micro finance groups or credit unions. The campaign is three-fold:

The full report will be available soon at www.challengingthecrisis.com/en/youth-report

Support the 'Challenging the crisis' campaign for a European Year for SSE.