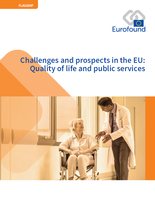 Levels of trust and social cohesion have recovered overall in the EU since the financial crisis, perceived social exclusion has declined and there has been an increase in active citizenship and civic engagement. At the same time, however, nearly half of all Member States reported lower levels of average trust in national institutions in 2016 than previously and perceptions of tensions – between ethnic or racial groups, and between religious groups – were also more common than before the crisis, resulting in a significantly negative impact on trust in institutions. People with lower levels of perceived security in terms of housing, employment or old-age income have considerably lower trust in institutions than those with higher levels of certainty. These findings, based mainly on research carried out since 2016, are the result of a comprehensive review of the state of play regarding access to and quality of key services – health, long-term care, childcare and education presented in Eurofound’s flagship report ‘Challenges and prospects in the EU: Quality of life and public services’.

While the results present an uneven picture regarding service quality, they also give indications of how to offer more satisfactory support. Public services are recognised as a cornerstone of the European Pillar of Social Rights, with a particular focus on promoting access to quality services for all. Assessments of the quality of public services (particularly health care and childcare) have improved, particularly in countries where quality ratings were previously low. High levels of active citizenship and civic engagement reflect positive benefits, with great potential for further investment in this area to boost trust and cohesion.

Rates of loneliness, poor mental health and social exclusion are particularly high for older people in central and eastern Europe – in part due to poorly developed care services. There are also strong indications of increased risk of mental health problems among those aged 12–24 years, with many hard groups to reach, such as persons with chronic health problems, living in rural areas and not in education or employment. And while satisfaction with different aspects of health care has improved, many people were dissatisfied with being informed and consulted about their care – and this proportion was higher among people with low income.

This flagship report brings together in-depth contributions in the area of quality of society and public services, based mainly on research carried out since 2016. Recognising the fact that the quality of people’s lives is profoundly influenced by their access to quality provision in areas such as education, health, housing and social services, the report pays particular attention to regional and social inequalities and, where possible, changes over time.

Eurofound’s approach to quality of life in Europe is grounded in a concept linked to Eurofound’s mission and therefore relevance to the needs of policymakers among public authorities and social partners. It recognised that people’s everyday lives are played out in the context of living in a community and a society, framed by particular institutions and policies. Eurofound’s work consistently seeks to document and analyse the past with a view to helping to better shape and improve the future. Drawing on its wide-ranging analysis of quality of life and society in the European Union over many years, Eurofound aims to use this information, data and analysis to assist policymakers in understanding the progress made, defining the challenges which have emerged and outlining the steps that could be taken to improve the lives of all people living in the EU.