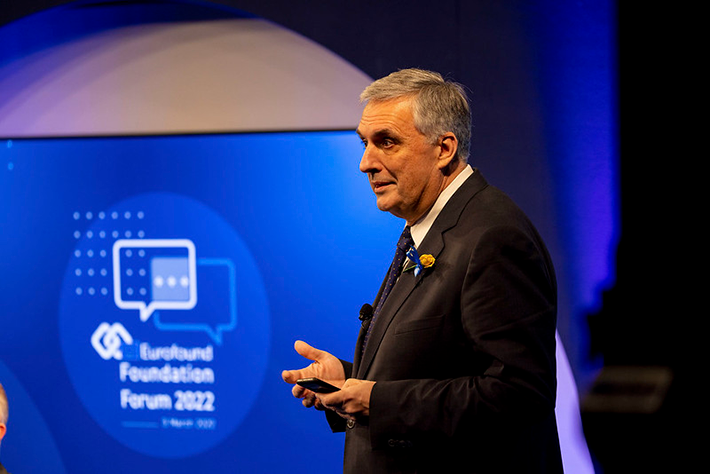 Today is Europe Day, and one hundred young people from Ireland and Ukraine will be marking the event at Eurofound, in peaceful south Dublin. Europe Day has traditionally been seen as a celebration of peace and unity in Europe, but, unfortunately, it must be marked differently this year. Europe Day 2022 must rather reaffirm the values of Europe: human dignity, freedom, democracy, equality, rule of law and human rights. These values are now being tested daily and must be rigorously defended for the future of Europe and the future of our young people.

Prior to the war in Ukraine, and the crisis that it has provoked, the EU was just beginning to overcome its biggest ever test, the COVID-19 pandemic, and Europe was moving to stabilise itself after this most deadly and far-reaching threat. Eurofound’s new Living and working in Europe yearbook highlights how the endless cycle of tightening and loosening restrictions that persisted for two years took its toll on people, with fatigue and anxiety infusing populations across Europe. It focuses on the findings of Eurofound’s Living, working and COVID-19 e-survey series, which recorded a new low in mental well-being among Europeans in April 2021, felt most acutely among young people and those who had lost their jobs. Hardship intensified among vulnerable groups during the pandemic, who found it increasingly difficult to make ends meet.

We must not forget that it took unprecedented action by Member States, backed by EU SURE funding, to limit the most damaging economic impacts of the pandemic and steer the Union away from the brink. Businesses survived, mass unemployment was averted, and disadvantaged households were protected against deepening poverty and accommodation loss. Active EU involvement made a clear difference compared to the previous crisis of 2008–2012. However, while some lives were ended, others were put on hold as Europe focused on weathering the storm. Europe’s youth was held back, as they waited for normal life to resume so that they could make a better future. COVID-19 ended a six-year trend of declining in youth unemployment, with young people more likely to find themselves unemployed and to report poor mental health than the rest of the population. Eurofound identified youth mental health as a crisis in its own regard, highlighting that the demand for mental health services for young people soared across Europe during the pandemic.

2022 therefore began with a tangible, if tentative, sigh of relief as restrictions were eased across several Member States, and people began to return to the workplace and education and to reconnect with their communities. The threat of expanding inequality still loomed as populations were affected differently by the pandemic, and Eurofound continued investigating the impacts of the pandemic on convergence across the EU.

Europe’s prioritisation of citizens’ rights, aspirations and perspectives could not be more in contrast to the callous disregard for human life and dignity that is Russia’s invasion of Ukraine. The war is having a devastating effect on the Ukrainian people, and an unprecedented refugee and humanitarian crises is unfolding. Economic sanctions have led to an additional surge in the prices of energy and food and the disruption of many established supply chain links. At this stage, we can foresee further deterioration of the refugee crisis that has already brought more than 5 million people to the EU from Ukraine, increased emigration from Russia, and deepened deficits in the markets for oil and gas as well as cereals and other commodities. For many years, we believed that wars of invasion for domination of foreign territories were part of Europe’s past. Now we are witnessing the worst possible man-made disaster unfolding at the border of the EU. Can we be confident any longer that we shall transfer the baton of a peaceful and prosperous Europe to the next generation? This war demonstrates that peace, democracy, freedom and progress are not a given. We need to constantly grow and protect them.

The impact of the war is inevitably reaching beyond Ukraine. Inflation is likely to increase further throughout the year, driven by energy and food prices as well as ruptures in supply chains. Such developments have the potential to deeply affect the living conditions of many European citizens. Food shortages might create additional humanitarian problems and additional migration pressure from Africa and other regions. The supply chain problems related to Russia and Ukraine are likely to persist, and the forecasts for economic growth in the world have already been reviewed downwards. These expected developments will most probably have a substantial effect on the world of work, quality of life and social cohesion in the EU in the years to come. In the immediate term, they are likely to hit vulnerable groups disproportionately, who are already reeling from the pandemic. Changing geopolitical relations may catalyse Europe’s sustainable energy transition, but in an abrupt and unplanned manner that could potentially exacerbate fuel poverty and create division around Europe’s green and digital objectives.

None of us wanted to transition from one crisis to the next, but this is not of our choosing, and it certainly is not of the choosing of the people of Ukraine – least of all its young people. The EU may be trying to recover economically and socially from the pandemic, one of the greatest threats in living memory, but it cannot ignore what is going on at its frontier nor shirk its responsibility to the millions that flood across its borders to flee the conflict. Eurofound, for its part, is adapting. We will expand our current work programme to respond to issues emerging from the war in Ukraine and provide important and timely analysis to policymakers. We also continue to prioritise young people in our work, not only as part of the European Year of Youth but also in line with our own research documenting how young people have been disproportionately impacted by consecutive crises in recent years.

Generations of European citizens were able to overcome narrow interests and divisions, to ditch conflicts and wars, and to build a democratic and free society. Now we all have the responsibility to stand firm and face current challenges.

The young people gathering at Eurofound today are united by common values and a desire for a better future. It is Europe’s duty to protect them and to act in their interests. Europe is all of us, it is built on the rights of European citizens. Each and every one of us has the responsibility to defend our values and to ensure a free, peaceful and prosperous Europe for the new generation.