Religion in the workplace 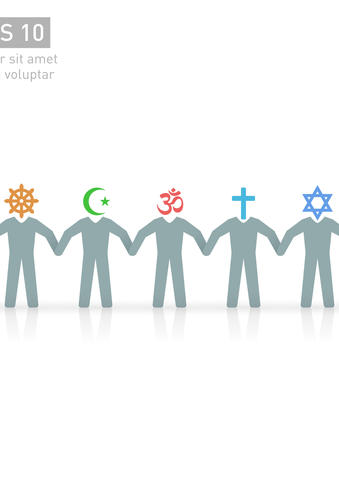 This article discusses the issues related to religion in the workplace, a topic that has received considerable attention in the media recently. An overview of significant cases of dispute between employers and employees is provided, as well as examples of social partners’ iniRead more

This article discusses the issues related to religion in the workplace, a topic that has received considerable attention in the media recently. An overview of significant cases of dispute between employers and employees is provided, as well as examples of social partners’ initiatives to accommodate the needs of religious people in the workplace.

Download the full article 'Religion in the workplace' (882KB PDF)

In the context of increased diversity in Europe, tensions linked to the rise of xenophobia prompted by the visible expression of religious beliefs and behaviours have emerged. In the workplace, conflicts regarding religion have been reported in a number of Member States. These involve contrasting attitudes towards religious values and their legitimacy in the working environment. In 2011, the European University Institute published a working paper on diversity challenges in Europe which argued that the integration and accommodation of ethnic and religious minorities was a key challenge for the European Union and that a spirit of tolerance, pluralism and social cohesion must be fostered in the 21st century.

Article 22 of the 2015 report on the application of the EU Charter of Fundamental Rights (PDF) stipulates that the European Union ‘shall respect cultural, religious and linguistic diversity’. However, there are growing concerns about the need to protect workers against discrimination, to enable their participation in the labour market and ensure the smooth process of the overall work organisation. At European level, Council Directive 2000/78/EC (the Employment Equality Directive) establishing a general framework for equal treatment in employment and occupation prohibits discrimination, either direct or indirect, on the basis of religion or belief. The directive covers ‘conditions for access to employment’ including ‘selection criteria and recruitment conditions’, ‘employment and working conditions including dismissals and pay’ and ‘membership of, and involvement in, an organisation of workers or employers, or any organisation whose members carry on a particular profession, including the benefits provided for by such organisations’, as listed in Article 3.

More recently, on 14 March 2017, in the wake of two cases in Belgian and French companies, the Court of Justice of the European Union (CJEU) clarified its interpretation of EU law against discrimination over the wearing of visible religious signs in the workplace. The Luxembourg judges recognised that companies can adopt a general company policy of religious and political neutrality that could result in the banning of headscarves. However the judges also recognised that a customer’s request not to professionally engage with an employee wearing a headscarf does not justify banning employees from wearing what are deemed to be religiously significant headscarves.

This topical update is largely based on contributions from Eurofound’s Network of European Correspondents for the EU28 Member States and Norway (see Annex 2).

Above is an excerpt. The full article Religion in the workplace (PDF) has information on: