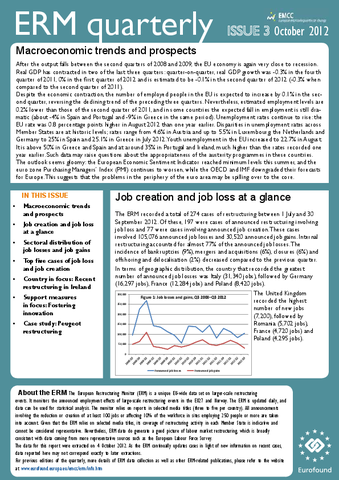 After the output falls between the second quarters of 2008 and 2009, the EU economy is again very close to recession. Real GDP has contracted in two of the last three quarters: quarter-on-quarter, real GDP growth was -0.3% in the fourth quarter of 2011, 0% in the first quarter of 2012 and is estimated to be -0.1% in the second quarter of 2012 (-0.3% when compared to the second quarter of 2011). The third issue for 2012 includes: macroeconomic trends and prospects; job creation and job losses at a glance (1/7/-30/9/2012); sectoral distribution of job losses/job gains, and top five cases; Recent restructuring in Ireland; Fostering innovation; Peugeot restructuring.
Useful? Interesting? Tell us what you think. Hide comments