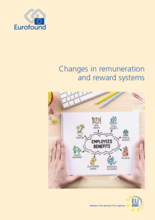 Ext. Reference:
Download the report '​Changes in remuneration and rewards systems'
Useful? Interesting? Tell us what you think. Hide comments