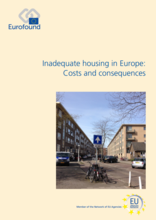 Inadequate and poor housing is costing EU economies nearly €194 billion per year in terms of both direct costs associated with healthcare and related medical or social services, as well as indirect costs such as lost productivity and reduced opportunities. The removal of housing inadequacies across the EU, or at least improving them to an acceptable level, would cost about €295 billion at 2011 prices. If all necessary improvements were completed at once, the cost to EU economies and societies would be repaid within 18 months by projected savings in healthcare and through better social outcomes. This is according to Eurofound’s new report Inadequate housing in Europe: Costs and consequences.

The report, requested by the European Parliament's 2013 resolution Social housing in the EU and based on data from the third European Quality of Life Survey (EQLS) finds that, although the quality of housing has been gradually improving in recent years, issues such as heating, insulation, structural problems and cramped conditions continue to affect a substantial proportion of the population in most Member States. These inadequacies have negative impacts on health, result in a greater vulnerability to accidents, and have a negative impact on productivity and economic output.

The report also shows considerable divergence in the standards of housing in Europe. Although only 3% of EU residents reported lacking basic facilities such as an indoor flushing toilet, or a bath or shower, this statistic masks large national differences. In Romania, for example, 22% of the population have neither a toilet, nor a bath/shower. Issues associated with structural problems are more widespread; 12% of EU residents reported damp or leaks, and 9% lived in accommodation with rot in windows, doors and floors. Again, there are pronounced national differences; in Cyprus more than half of residents reported a structural issue in their dwelling, whereas in Austria and Sweden it was less than one in ten.

If all the work to correct these issues was done at once, the €295 billion cost involved in removing housing inadequacies in the EU would be paid back via direct medical savings, and indirect savings and efficiency gains, in 18 months. In countries such as Cyprus, Portugal, Malta, Spain, Greece and Hungary the investment would be recuperated in less than one year. This figure does not include non-health related outcomes such as the impact on market values, home insurance, enforcement action, or the potential economic and social capital associated with community development via the improvement of housing.

The report recommends immediate actions that can be taken, such as improving data collected at national level, so that interventions can be well planned and capitalise on a strong return on investment. The report is also accompanied by a set of case studies from across Europe that will be of particular interest to housing policy experts and legislators.

Finally, it highlights that the removal of housing inadequacies is a long-term investment that will pay both short-term and long-term social and economic dividends. The positive outcomes are not limited to health, where savings on healthcare provision alone would be some €9 billion in the first year, but can also entail the stimulation of the local economy, improved social protection of groups in difficulties, the integration of migrants, and fostering social mobility, particularly for Europe's most disadvantaged children living in inadequate housing.