Restructuring in SMEs – Upsides and downsides for jobs 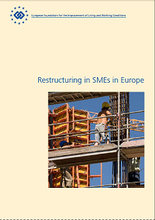 Small and medium-sized enterprises (SMEs) are major employers in Europe, providing around two-thirds of private sector jobs. Reorganisation of these enterprises – for reasons such as expansion, internal change or avoiding bankruptcy or closure – can have a significant impact on employment. In 60% of SMEs that took part in a study by Eurofound, staff numbers fell as a result of restructuring and in these cases the net reduction in staff was between 15% and 20% on average.

Lay-offs can be particularly difficult within SMES, as employers work closely with their staff and have built relationships with them. Given that SMEs experience greater difficulties attracting skilled staff, firms also risk losing expertise that they will have difficulty replacing in the event of an upturn in business. For these reasons, in crisis situations, SMEs tend to delay dismissals and often opt for alternatives to lay-offs: one-fifth of the SMEs studied reduced working time, while a similar proportion implemented pay freezes or cuts.

On a brighter note, about 40% of the restructurings gave rise to new jobs. Increases were in the order of 20% to 35% net on average, but a comparatively high number of companies expanded their workforces by 60% or more; several even doubled their staff numbers.

Aside from the effect on staff numbers, restructuring has an impact on job quality. In half of the companies studied, staff were trained to equip them with new skills for new responsibilities. On the downside, workload increases and stress were reported among some. In a quarter of companies the restructuring caused a worsening of the working atmosphere, conflicts among staff and resistance among the workforce, in spite of efforts by management to communicate its plans and goals. However, more than 20% experienced an improved atmosphere, with increased commitment and motivation among the workforce. In just 5% of the restructurings was a deterioration of the workplace climate a long-term outcome.

Employment effects are just one topic in this major research project on restructuring in SMEs recently published by Eurofound. Given that SMEs have been recognised as key drivers of growth and innovation by the European Commission, the distinct and specific challenges they face warrant attention. Eurofound’s findings, launched at a European Parliament Working Lunch on 14 May 2013, comprise: