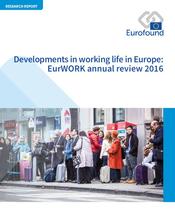 Working life in Europe is in a period of transition; economic growth has picked up, unemployment rates are generally in decline, and 2016 was the the third consecutive year of increased employment. However, social partners are concerned about the challenges posed by the UK’s withdrawal from the EU, particularly in relation to business, trade, and conditions for workers in the UK. There has also been a renewed focus on the issue of pay inequality throughout Europe.

The EurWORK annual review 2016 is the latest in the series and summarises the most recent working life developments, particularly in terms of industrial relations and working conditions, at EU level and in the EU Member States and Norway. The review is based on the inputs of more than 50 contributors from Eurofound’s Network of European correspondents and analyses changes to the economic and labour market situation, policy developments at EU level related to working life, and relevant political developments.

The review highlights that as Europe has moved out of the unemployment crisis there has been increased focus on wage inequality; this has particularly been the case for young workers. In a number of countries in Europe the debate has shifted from facilitating youth employment via youth minimum wages, to pay gaps or inequalities that have arisen from the application of these policies. It also looks at the issue of work-life balance and the juxtaposition between meeting family obligations and professional commitments.