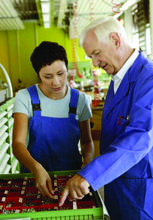 European societies are ageing, with older and shrinking workforces. To maintain competitive economies and to sustain adequate pension systems, a policy priority for European governments and EU policymakers is to increase the employment rates of older people. Often, this requires fresh thinking about age, work and retirement.

Eurofound research on income from work after retirement shows that the reasons for working after retirement go beyond financial need: this group of older workers enjoy the contacts with clients and colleagues and appreciate the opportunities for learning and to contribute to society.

When surveyed, many people aged 50+ who are retired, and currently not involved in paid work,  indicated they would actually prefer to be involved in paid employment – this was particularly the case among people who are relatively young  and who have a higher level of education.

The research also identified a number of barriers preventing people who have retired, often early, from taking on paid work, such as the limited options to work part time and rigid pension rules. Other barriers can be lack of information and awareness and age barriers encountered, for example, with regard to training.

In its recent report on Work preferences after 50, Eurofound found that 45% of workers aged 50+ would prefer to work fewer hours. By facilitating part-time work, it is likely that this group of older people would be able and willing to continue working longer.

Part-time work among older workers can lead to a better work–life balance, with time off for activities such as leisure pursuits, caring activities and volunteering. Eurofound’s study on Volunteering by older people in the EU, based on case studies in 11 Member States, demonstrates that engaging in meaningful volunteering activities for an older person can enhance their community involvement and sense of personal fulfilment and avert the risk of social exclusion often experienced by this group.

One way of satisfying the wish to work part time among older workers is to make available the option of combining part-time work with a partial pension. A forthcoming study from Eurofound will document the nature and extent of such measures in the EU and Norway.

These include both government measures regarding public pensions and also collective agreements on occupational pensions. Input from Eurofound’s Network of European Correspondents will be combined with evidence from a literature review and data analysis, and potentially backed by case studies from selected Member States.

The research will also map changes that have taken place within countries over the past 10 years, linking them to differences in employment rates among older people, and highlighting examples of good practice. With work ongoing during the course of 2015, it is planned to publish the results in 2016.