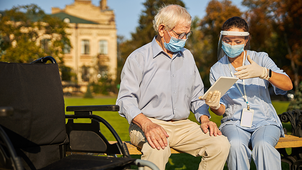 The COVID-19 crisis had a significant impact on wages and wage setting across Europe in 2020. The uncertain economic scenario, together with the difficulties inherent in online bargaining, led to a general postponement of collective agreements to 2021, especially at company level. Real wages maintained a positive trend during 2020 in most EU countries, with just modest increases, while higher increases were observed in the public sector. Wage support mechanisms introduced by governments also contributed to supporting wages in the private sector for workers whose hours have been reduced or who have been temporarily laid off. The crisis seems to have particularly affected low-wage workers, occupations, and sectors. It is likely that wage support mechanisms and minimum wages have played a key role in reducing the impact of the COVID-19 crisis on growing earning inequalities.

Over one year after the start of the COVID-19 crisis, there is still much uncertainty regarding the road towards economic recovery and its pace. Wage setting and wages are expected to play an important role in facilitating an inclusive and fast recovery. On the one hand, wage-setting mechanisms should be able to respond flexibly to the new conditions to reduce the impact on job losses. But at the same time, it is critical to maintain wage levels to maintain incomes and satisfy demands. Balancing these two imperatives is not an easy task, as is made evident by the difficulties experienced by social partners and governments when faced with the task of renewing collective agreements and negotiating or deciding on minimum wage increases.

The impact of the pandemic on wage-setting structures, processes and practices has so far been limited in most countries. In terms of collective bargaining structures, there has been hardly any change in the EU countries, Norway and the UK. Compared to previous crises, no trend towards decentralisation of collective bargaining has been observed. Although claims for greater flexibility in relation to wage setting have been made (for example, in the Netherlands), these have not translated into greater pressure to push collective bargaining down to the company level. Existing coordination mechanisms have also remained in place, such as the role of the manufacturing collective agreement in spearheading collective agreements in other sectors in countries like Sweden, and similarly the technology sector agreement in Norway.

While collective bargaining structures and coordination mechanisms remained stable, the process of negotiating collective agreements came to a sudden halt during the pandemic. In many countries, the renewal and negotiation of wage agreements was postponed until the end of 2020 or the beginning of 2021 – notably in Cyprus, Finland, Germany, Italy, the Netherlands, Portugal, Spain and Sweden. Two main reasons have been given by social partners for the deferral of negotiations. First, and most importantly, considering the uncertainty surrounding economic developments, it is hard to negotiate wage increases without having reliable forecasts about inflation, productivity, or GDP growth. Second, the technical difficulties associated with distance and virtual bargaining makes the process challenging. While the cessation of collective bargaining has affected bargaining at all levels, it was particularly acute in the case of company-level bargaining, as illustrated by the French case where the government adopted measures to facilitate the remote negotiation and signature of collective agreements. The deferral of wage setting, together with the difficulties facing many sectors and the uncertainty surrounding the economy, portends a particularly difficult bargaining season in 2021. Those collective agreements that were successfully signed during 2020 (in Austria, Bulgaria, Estonia and Germany) tended to deliver either moderate wage increases or a freezing of wages.

Due to the lack of data on collective bargaining coverage, it is not possible to assess developments in this area. As many countries postponed the renewal of collective agreements expiring in 2020, the existence of temporal extension clauses (known as ‘ultra-activity’) in collective agreements will be key in limiting the potentially negative impact on workers of this sudden halt. On a related issue, there are reports of a drop in the number of workers covered by negotiated wage updates in Portugal, and of a decline in the number of pay deals applied in Ireland and the UK.

Overall, average real wages in most EU countries increased in 2020, albeit at a lower rate compared to 2019 (for example, in Croatia, Estonia, France, Latvia, Lithuania, Luxembourg, the Netherlands, Poland and the UK). In the early stages of the pandemic, real wages experienced a decline in many countries. This decline was triggered by factors such as the increase in unemployment, a drop in the variable part of the salary especially for managerial positions (for example, in Belgium and France), the reduction of overtime, and the extension of short-time working schemes (for example, in Germany and Malta). However, wage dynamics varied greatly across sectors, with the Horeca (hotel, restaurants and catering) sector experiencing the largest decline in average wages in most countries. The asymmetric sectoral impact on wages also translated into lower wage increases for some groups of the population, such as young people (for example, in Luxembourg), immigrant workers and women (for example, in Portugal) who are more frequently employed in low-wage sectors.

The most important factor in maintaining wage levels for a large part of the workforce has been wage support mechanisms. These have taken the form of tax credits (for example, in Czechia) or wage subsidies. Wage subsidies and supplements have been created from scratch in some countries: examples include the 60/40 scheme in Bulgaria; the Temporary Emergency Measure for Work Retention scheme (Tijdelijke Noodmaatregel Overbrugging voor Werkgelegenheid or NOW) in the Netherlands; the Temporary Wage Subsidy Scheme (TWSS) in Ireland; and the SURE programme in Croatia. In other countries, existing mechanisms have been extended and modified to enhance effectiveness under the current circumstances (such as in Denmark and Germany). The replacement rates of these programmes have varied significantly from country to country and in some cases apply only to some sectors (such as in Bulgaria). Moreover, assessing the extension of the wage support mechanisms is difficult due to the lack of comparable data and the diversity of the policies implemented.

Some of these programmes have also been adjusted over the course of the pandemic. For example, in the case of Ireland, the TWSS was subsequently replaced by a lesser subsidy support called the Employment Wage Subsidy Scheme (EWSS), effective from September 2020 onwards. In the case of Bulgaria, the 60/40 was extended to other sectors in June and with higher coverage (covering 80% of the wage).

Government wage support schemes were not only launched with a view to enable companies to retain workers. In Norway, a scheme negotiated among social partners was implemented to help re-employ previously laid-off staff. In the case of Hungary, where job retention and support measures have not been as widespread as in other countries, the measures have also been aimed at supporting job creation.

Implementing wage support mechanisms is a complex process and some countries – notably Romania – have reported significant administrative problems. In Bulgaria, too, delays in payments have been reported.

In line with private sector wage developments, real wages in the public sector also increased in 2020. In fact, in most countries, public sector real wage increases outpaced those of the private sector. In some countries, such as Slovakia, an agreement on public sector wage increases for 2020 had already been signed, thereby making it difficult to change. But in other countries, additional increases (Bulgaria, Czechia, Lithuania and Sweden) or one-off bonus payments (Austria, Czechia, Germany, Latvia, Slovenia and Spain) were granted to some groups of workers – notably in the education, social services and health sectors – due to the hazardous conditions and long working hours required during the pandemic. There are also cases of public sector wage freezes, as in Croatia.

More importantly, the COVID-19 pandemic has reopened the debate about the wage conditions of certain groups in the public sector, in particular doctors, nurses and other health workers. The pandemic crisis has highlighted the critical role played by health workers in the fight against the virus. However, the truth is their working conditions are often characterised by relatively low wages and instability.

Role of minimum wage in tackling rise in wage inequality

Another key aspect to consider in relation to the wage impact of the COVID-19 pandemic crisis is wage inequality. Given that the sectors that have been more affected by social distancing measures and lack of mobility are frequently labour-intensive and low-wage sectors, the asymmetric impact of the COVID-19 crisis can translate into an increase in wage inequality. This has already been reported in some countries: for example, Bulgaria, Czechia, Estonia Greece, Lithuania and Luxembourg. The crisis has impacted more on low-wage workers than on other workers. [1][2] If the higher wage increases reported in the public sector are taken into account, an overall increase in inequality will be the inevitable outcome.

In most EU countries, governments approved nominal and real increases in statutory minimum wages for 2021. These increases will exert a positive effect on reducing some of the wage inequality arising from the crisis. In particular, the minimum wage will have a relatively stronger impact on groups such as young workers, immigrants and women. In countries like France, the wage support measures use the minimum wage as a reference to determine the amount paid by the state, with the objective of reaching 100% of the net salary.

Wages and the institutions responsible for setting them play a crucial role, both as an adjustment mechanism and in helping economies recover and regain their footing on the inclusive growth path. The analysis of wage-setting practices and wage developments in the EU27, Norway and the UK reveals several interesting trends, with relevant implications for future developments and the pace of economic recovery expected in 2021.

First, there are no signs of downward wage adjustment taking place so far. In most European countries, there were real wage increases during 2020, despite a fall in GDP. Collective bargaining structures and processes remained in place without any pressure to move to decentralisation. Demands for greater flexibility have in most cases been accommodated by existing institutions and, when possible, revisions have been made. The uncertainty surrounding the economic situation and the difficulties in finding reliable estimates on medium-term developments led many countries to postpone the negotiation or renewal of many collective agreements. It remains to be seen what happens in the 2021 bargaining round, since there will be pressure for downward wage adjustment. Moreover, social partners will be faced with the burden of having to enter into wage negotiations for postponed collective agreements.

The state has played a key role through the roll-out of three types of policy interventions. First, governments aimed to maintain wages in the private sector through wage support schemes. Second, governments guaranteed real wage increases for public sector employees. In many countries, this meant public sector wages outpaced private sector wages, while in a small number of countries wage freezes have been implemented. Given the importance of the public sector for wage setting, this will most likely bring higher demands for wage increases to the next 2021 collective bargaining round in the private sector.

Finally, minimum wages have increased in most EU27 countries, Norway and the UK for 2021. Granting higher minimum wages for 2021 is particularly relevant in the current context, as in several countries there are signs of growing earnings inequality caused by a stronger impact on labour-intensive, low-wage sectors such as Horeca and long-term care, where there is a predominance of young people, immigrant workers and women. Raising minimum wages will have a stronger impact on these groups, therefore contributing to reduce some of the inequalities introduced by the crisis. On the other hand, having higher minimum wages will spill over into collective bargaining, hence adding some tensions to the bargaining rounds due to take place in 2021.