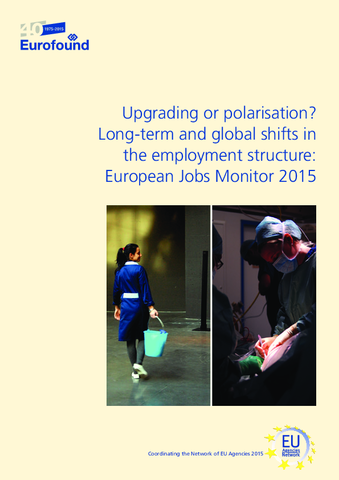 Europe has begun to emerge from the prolonged slump caused by the global financial crisis in 2008 and exacerbated by the euro zone single-currency crisis in 2010–2011. In the last year, aggregate employment levels have risen faster than at any time since 2008. This, the fourth annual European Jobs Monitor report, looks in detail at shifts in the employment structure at Member State and aggregate EU level over 2011–2014. The objective is to assess the extent to which recent shifts are polarising, arising from a decline in mid-paid jobs, or upgrading as a result of growth in high-paid jobs. The analysis finds that the most recent pattern is more downward‑skewed, mainly as a result of stronger growth in less knowledge‑intensive services. The report also summarises the main findings from two other analyses of labour market shifts: one centres on developments in six European countries, while the other focuses on six non-EU countries.