Equality still far from reach for women in management 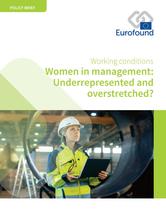 Management is still mostly a man's game. The limited presence of women in management roles in European workplaces, despite years of gender equality policy, illustrates the magnitude of the challenge in achieving gender equality at work and highlights the need for more concerted effort and comprehensive long-term strategies to drive change.

Eurofound's new policy brief, the first of its kind, focuses on women who have overcome the barriers and advanced into management. It shows that, despite rising participation in the labour force, women’s careers remain concentrated in specific jobs and economic sectors, and their career mobility and advancement through the ranks into management remain limited.

On average, women still make up just 36% of all managers in Europe, and despite some progress in recent years, men outnumber women in management positions in most sectors. The is also significant variation in the share of women managers in different parts of the EU. In Lithuania, Hungary, Bulgaria, Cyprus and Latvia over 40% of managers are women - more that 5% above the EU average - whereas in Greece and the Czech Republic less than 30% of managers are women.

The women that make it into management are more likely to be in non-supervising management roles where they manage operational responsibilities but not staff. Among those who do supervise staff, women are more likely than men to be managing other women, younger workers and workers on non-standard contracts. Women are also more likely to be in precarious leadership positions that have a higher risk of failure - either because they are appointed to lead an organisation or team that is in crisis or because they are not given the resources and support needed for success.

Female workers often have less physical risk in their working environment than male colleagues, but for those that make it into management this advantage shrinks, with female managers reporting having to lift and carry heavy loads on the job almost to the same extent as men. Women also generally report more negative spill overs between work and family life than men and this holds true for managers as well, with female managers reporting higher tensions between work and non-working life.

When it comes to addressing unequal representation of women in management, and some of specific pitfalls of management experienced by women, the policy brief recommends addressing management cultures that disincentivise women, promoting positive role models for young women wishing to pursue a career in management, promoting flexible working arrangements that can help to reconcile the imbalance between work and family life, and further progressing European-level commitments to strengthen gender equality at work.