COVID-19 unleashed the potential for telework – How are workers coping? 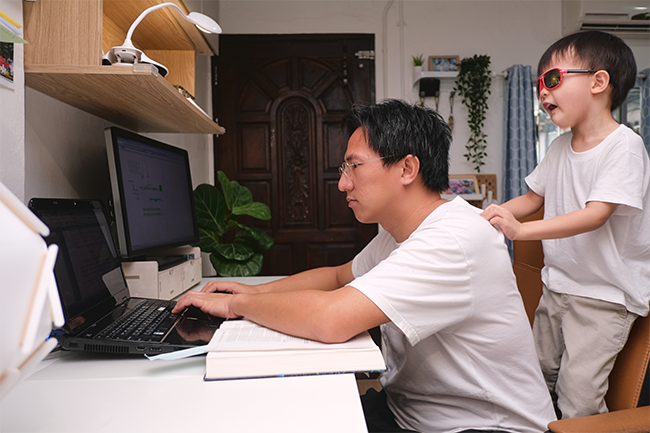 The COVID-19 health crisis prompted governments to take the unprecedented step of shutting down all workplaces, apart from those providing essential goods and services, to control the spread of the virus. Every worker who was able to do so began to work from home, initiating a social experiment of a type and on a scale unseen before. The world of work will never be the same again. This event has accelerated the transition from a regular, bureaucratic and ‘factory-based’ organisation of work to one based on flexible task allocation and management by objectives. While these new-minted teleworkers are certainly better off than those who have lost their job or are at risk of losing it, there are downsides to the experience too.

More people are working from their homes than at any time since the Industrial Revolution. In April 2020, an online survey of Europeans conducted by Eurofound found that 37% of employed people had started working from home because of the pandemic. Previously, Eurostat had estimated that just 5% of the EU working population worked regularly from home in 2017 [1] – surprisingly low, given that 57% of workers reported working with ICT to a medium or high degree of intensity to Eurofound’s 2015 European Working Conditions Survey (EWCS). [2] COVID-19 has unleashed the huge unexploited potential for flexible working.

The numbers who have switched to teleworking are higher in individual countries, rising to more than half of the working populations in Belgium, Denmark, Luxembourg and the Netherlands, and reaching 60% in Finland. While these are big numbers, they were foreseeable: data from the 2015 EWCS indicated higher percentages teleworking in those countries at that time. Northern and western European countries have generally been faster at digitalising workplaces and putting in place the legal infrastructure that has enabled a smooth switch from one work arrangement to the other. In addition, the culture of work in these countries – project based and with a high degree worker autonomy and responsibility – is better suited to telework than one of set hours and close supervision.

Telework has given a lifeline to many businesses, ensuring their continuity, and has saved many people’s jobs. It has enabled working parents to continue to work despite having to care for their children full-time in the wake of school closures. We will not know the experiences of these workers with precision until more research is done, but based on previous Eurofound research, we can make some predictions. For instance, many workers are likely to be experiencing benefits such as increased flexibility to manage the needs of work and family life, more autonomy and improved productivity.

They are also likely to be encountering the difficulties that arise when work is not tied to a specific place and when connectivity to work is constant. The line between work and home becomes blurred, and work spills into family time. In Eurofound’s April 2020 survey, 27% of respondents working from home reported that they had worked in their free time to meet work demands. This is in line with the 2015 EWCS, which found that 28% of regular teleworkers frequently worked in their free time, compared to 8% of the workforce as a whole. It is also more likely that they are working longer hours than previously and missing proper rest periods.

The 2015 EWCS found that one-third of teleworking employees who worked in their free time experienced conflict between the demands of work and home. The April survey indicated that workers with young children have the most problems in this respect: 22% of people working remotely with children under 12 reported that they struggle to concentrate on work, compared to 7% of those with older children and 5% of those with no children.

More autonomy has a downside of possibly increasing the intensity of work, arising from constant interruptions, pressure from colleagues and managers, and heavy workload. In these circumstances, autonomy turns from being an asset (a resource that gives workers the freedom to choose when, where and how to work) into a liability (the obligation to deal with an increased workload). This tends to be a problem especially for workers and managers who are new to regular telework. In the present crisis, it could be exacerbated if workers, or the company that employs them, find it hard to adapt and communicate in the new environment.

Being able to continue working has been critical to many workers’ psychological well-being in this troubling time – employment security is associated with good mental health. But Europe’s new teleworkers might develop specific health problems. People who regularly telework from home have a higher likelihood of experiencing sleeping disorders, for instance, related to irregular working time patterns, stress and exposure to the blue light of digital screens. Headache and eyestrain are also more common among these workers. Moreover, in the current crisis, because of the increased demands from both work and home, levels of fatigue could also be higher than home-based teleworkers have experienced previously.

Eurofound research has also found that regular home-based telework can take a physical toll on workers. Workspaces set up ad hoc in the home as well as laptops and other ICT equipment might not meet ergonomic standards. This can lead to constrained or poor postures, which puts teleworkers at risk of developing musculoskeletal disorders.

Exerting the right to disconnect

Regardless of their previous work arrangements, it is likely that most workers who use ICT in their jobs have changed their place of work for the foreseeable future. It will be interesting to observe how policymakers react to the challenges posed to workers’ health and well-being by the increasing importance of this work environment. Before this health crisis, the risks related to constant connectivity had prompted a number of European countries – Belgium, France, Italy and Spain – to legislate for remote workers’ right to disconnect in their free time. Will more countries follow suit? Or will constant connectivity become a norm? A forthcoming report from Eurofound notes that in some of the countries with a right to disconnect that right can be enforced without company or individual agreements between the employee and the employer. Moreover, in several countries where this right has not been established, the issue is receiving more prominence and has been raised in social dialogue.

For the first time in the history of Europe, half of the working population of some countries is working virtually. It is likely that in the long term the numbers of workers working from home, or under other flexible arrangements, will remain much higher than in the pre-COVID-19 era. The main reasons for this will be that, after a period of adaptation, the cultural, technological and social barriers to this arrangement will fade. This current experiment is proving to employers that such arrangements work – especially if combined with some physical presence at the workplace – and can have a positive impact on productivity and work–life balance.

Telework, ICT-based mobile work in Europe: Trends, challenges and the right to disconnect