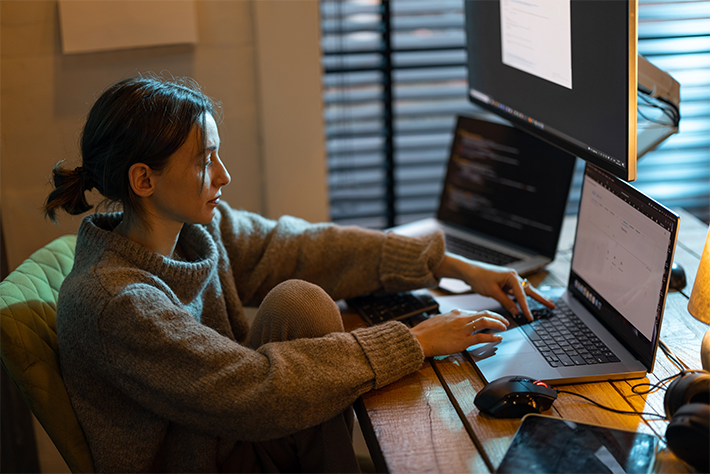 Telework has become a permanent feature of working life in Europe. While we’ve seen the benefits of more flexible ways of working – particularly during the pandemic – the problems that arise from an increasingly connected life are also becoming clearer. Unfortunately, legislation alone may not be enough to ensure our right to disconnect.

The COVID-19 crisis has undoubtedly been an accelerator of change. Yet, despite an increase in people returning to offices as EU Member States slowly emerge from the pandemic, the reality is that telework is here to stay; Eurofound’s recent e-survey results show that teleworking numbers have stayed consistent (18% in 2021 and 2022) and that over 60% of people would prefer to work from home at least several times per month.

However, with this inexorable expansion of remote working options comes evidence to suggest that teleworking employees clock up more hours than office-only workers. What’s more, this increase is associated with employees working atypical or unsocial hours, often including unpaid overtime.

This is not an entirely new phenomenon. Over the last 20 years, factors such as the advent of highly flexible ICT-based work practices have enabled more people to work anytime and anywhere and have fed a particular culture of working for longer and being available outside standard working hours. The pandemic-driven spike in teleworking has intensified this trend. As a result, more and more employees who work remotely are finding it difficult to disconnect and maintain the separation between work and home life.

The numbers speak for themselves. In Austria, almost half of teleworking employees in 2020 reported being available to respond to their employer at times when they would not otherwise be working. In Italy and Slovenia in 2021, one in four employees reported that they had been contacted daily outside working time on matters related to work. The subjective and cultural aspect of constant availability is captured by the finding last year that one-third of teleworkers in Greece reported being compelled by their employer to be available outside working hours, even if it was not necessary.

Clamping down on constant connectivity

It is widely recognised that being able to disconnect and maintain normal working hours contributes to employees’ well-being and performance, as well as the success of the companies they work for. In recognition of this, the ‘right to disconnect’ has emerged as a legal means of protecting employees’ right to switch off – literally and figuratively – at the end of a working day.

Although all these countries have incorporated the right to disconnect in legislation, differences exist in respect to content, coverage, requirements and ways of implementation. This variation arises from differences in industrial relations systems and adaptation to national practices at work.

Of the remaining Member States, some are currently debating the introduction of legislation, while others have preferred to leave the issue to be addressed at company level by the social partners or through company policy. For the Nordic countries – Denmark, Finland and Sweden – the right to disconnect is not on the political agenda. National research in these countries shows that the share of employees reporting problems related to working time is not higher than in other countries with legislation on the right to disconnect. This finding suggests that addressing the problems related to working time in telework arrangements is complex and might require different action depending on the context.

Having the right to disconnect in national legislation might not be sufficient to prevent the spread of an always-on work culture; evidence shows that even in countries that have a right to disconnect regulation, not all companies have adopted a policy related to this right.

In Spain in 2021, for example, only one in three employees reported that the right to disconnect is recognised in their company (via sectoral or company agreements or internal agreements or protocols).

Despite introducing relevant legislation as far back as 2017, 60% of teleworking employees in France still did not have a formal right to disconnect in 2021. Only half of employees had specific defined hours when they could be reached, while a similar proportion reported that they felt ‘overconnected’.

In Ireland, despite the code of practice coming into effect at the beginning of 2021, by the end of that year 14% of employees reported that their employer did not even acknowledge this right.

The fact that legislation alone has not yet managed to guarantee that all workers benefit from a right to disconnect might be due to some characteristics of the legislation [1] or because regulations need more time to be implemented at company level. One major factor, however, is the absence of a company culture that recognises employees’ right to disconnect.

This is not a technological problem: screens can be switched off, computers unplugged, phones put on flight mode. And, unfortunately, legislation cannot quickly change unhealthy habits. While it is essential to enshrine the right to disconnect in national legislation, collective agreements and company policies, without a ‘right to disconnect culture’, we may struggle to find the right work–life balance.