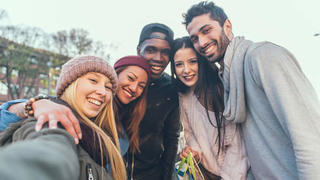 Youth is the term used to describe the period between childhood and adulthood. While this may be a fluid definition, it is also used in policy terms to refer to specific age groups. Providing a good environment for young people to grow up, learn and work in is a key goal for Europe and for Eurofound – but one that faces particular challenges. Young people have long been an important focus of policy at EU level and this is particularly true today.

While we now know that the idea that ‘COVID-19 only affects older people’ is fake news, the first weeks of the pandemic...
Blog18 Мај 2020

The impact of COVID-19 continues to create chaos in people’s lives across Europe and the world. The economy is heading...
Blog12 Мај 2020

Addressing the youth employment crisis and its knock-on effects remains high on the EU’s policy agenda, despite some improvements in recent years. On 7 December 2016, the European Commission issued a Communication ‘Investing in Europe's Youth’.Read more

Addressing the youth employment crisis and its knock-on effects remains high on the EU’s policy agenda, despite some improvements in recent years. On 7 December 2016, the European Commission issued a Communication ‘Investing in Europe's Youth’. This is a renewed effort to support young people in the form of a Youth Package. The package supports better opportunities to access employment, via the Youth Guarantee and Youth Employment Initiative, better opportunities through education and training, as well as better opportunities for solidarity, learning mobility and participation.

As part of this effort, the new EU Youth Strategy (2019–2027), adopted on 26 November 2018, sets out the framework for cooperation with Member States on their youth policies. Activities are grouped into three main areas of action, around the words ‘Engage’, ‘Connect’ and ‘Empower’.

Eurofound’s work on youth issues links in with the Commission’s 2019–2024 priority on an economy that works for people and is highly relevant here.

To date, Eurofound has carried out a large body of work on youth issues related to employment, quality of life and social cohesion. Research continues to look at issues affecting young people as part of several topic areas, particularly well-functioning and inclusive labour markets, quality of life and quality of society, as well as access to public services.

In the aftermath of the crisis, EU unemployment reached a record level of 10.9% in the first quarter of 2013, but hit 23.5% for the under-25s and went to even higher levels in individual Member States. With youth unemployment at such critical levels, despite some recovery, the key questions are 'Where are the jobs?' and 'How else can young people be helped?' Eurofound's research provides a broad range of inputs to developing youth policy, looking at:

Alongside high unemployment, the Member States have been dealing with the disproportionate impact of the recession on young people under 30, even those with higher levels of education. The number of those aged 15–29 who are not in employment, education or training (NEET) rose rapidly after 2008, but has been declining again since 2014 returning to pre-crisis levels by 2018. Yet the rates remain high in some Member States, particularly Italy and Greece. Eurofound seeks to understand the economic and social consequences of youth disengagement from the labour market and education.

Some young people face particular difficulties in accessing employment: for example, those who have a disability or other health problem are 40% more likely of becoming NEET than others. A policy of active inclusion is seen as the most appropriate for addressing these difficulties. Eurofound has analysed active inclusion policy for young people with disabilities or health problems in 11 EU Member States.

The youth dimension is relevant across many areas of Eurofound research. The European Quality of Life Survey (EQLS) 2016 found important differences between age groups in relation to quality of life, social inclusion, the quality of society and access to public services. EQLS data have also been used to compile a policy brief on the social situation of young people in Europe.

The European Working Conditions Survey (EWCS) 2010 revealed that some aspects of the working conditions of young workers (under 25) differ considerably from those of older workers. More recently, data taken from the EWCS 2015 has shown that the skills gap between younger and older workers is gradually closing.