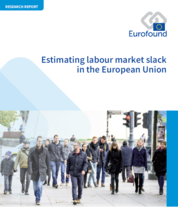 There were close to 23 million unemployed people of working age in the EU in 2015 but around 50 million people in a broader category of labour slack, encompassing inactive people wishing to work and underemployed, involuntary part-timers as well as the unemployed, according to a new report from Eurofound, the Dublin-based EU Agency.

The unemployment rate is an important and well-publicised measure of labour market performance in developed market economies. It is currently high in the EU compared with other developed countries and still well above its historical average nearly a decade after the beginning of the global financial crisis.

But focusing exclusively on the unemployment rate fails to take account of other numerically important manifestations of labour market slack - or simply labour slack.

The aim of this report is to develop a more nuanced estimate of labour slack using EU Labour Force Survey data, which allows involuntary part-timers and inactive people with some labour market attachment to be identified and quantified.

The most important indicator of labour slack is the unemployment rate, but an exclusive focus on this fails to take account of the four-fifths of the jobless population who are inactive rather than unemployed. Many people in this group have some form of labour market attachment – they would like to work, are seeking work or are available to work. In addition, many part-time workers would like to work longer hours.

The authors calculate that there were around 50 million people in the broad category of labour slack in 2015 and that labour slack has been slower to fall in response to the recovery than unemployment.