Focusing on the impact of the crisis 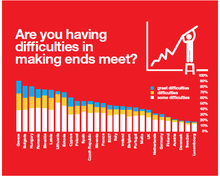 The economic crisis has profoundly changed the quality of life of Europeans – changes described in the latest issue of Eurofound’s magazine Foundation Focus.

A comparison of the findings from the second and third waves of the European Quality of Life Survey in 2007 and 2011 – as documented in the Focus – reveals the extent of the impact of the crisis and of disparities in quality of life both across the continent and between social groups. Europeans are finding it harder to make ends meet, particularly those who have had to cope with pay cuts or unemployment.

Many European residents, particularly those who are already suffering disadvantage, experienced a worsening of their health in the years between 2007 and 2011. In particular, the indicators for poor mental health are notably worse among Europe’s young people, who are especially affected by unemployment. However, elderly people suffer their own forms of disadvantage, being much more likely to lack sources of social support than younger Europeans.

Public services, such as healthcare, are an important component of overall quality of life, and in times of difficulty they can support and protect citizens. But sharp cuts in government finances have affected many countries’ ability to provide services at the levels required or expected.

Substantial differences emerge between Member States in terms of their residents’ rating of the quality of public services in 2011, and in terms of how that rating has changed since 2007. In a number of countries residents rate public services in the aggregate as being better than the EU average, and give them a higher rating than in 2007 – Austria, Germany, Luxembourg and the UK. (Also included in this group is Spain, despite the economic difficulties it has faced since 2008).

Meanwhile, for a large group of countries – 17 in all – ratings for services in 2011 are worse than they were in 2007; of these, 11 have poorer ratings than the EU27 average. Notably, this group comprises 9 of the 10 eastern European Member States (together with Ireland and Greece).

This issue of Foundation Focus also includes an interview with John Halloran of the European Social Network who sets out his ideas for building the foundations for a new welfare state in Europe, and who warns ‘This situation of restricted expenditure is permanent’. Findings on best practice in household debt-assistance services are outlined, as are quality of life findings for Croatia, Europe’s newest Member State.

This issue also looks at the challenges that arise from juggling care tasks with employment, the effect of austerity measures on the delivery of public services at the national level, and the impact of the crisis on working conditions and social dialogue in central public administration.