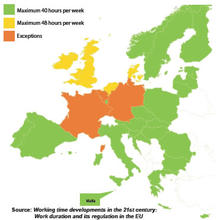 The figure shows the duration of the statutory maximum working week in EU Member States according to the legislation in place in 2014. With the exception of Belgium, France and Germany (shown in orange), most countries fall into one of two main groups: those that set their maximum weekly hours at the 48 hours specified by the Working Time Directive (in yellow); those that operate a lower limit of 40 hours, which may be extended up to 48 hours or more under certain conditions (in green).

Read more in Working time developments in the 21st century: Work duration and its regulation in the EU.