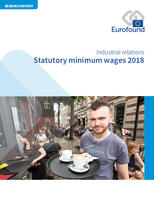 Over the course of 2017, statutory minimum wages increased in the majority of countries in the EU that have a generally applicable minimum wage. Although the largest increases have been in countries with the lowest minimum wage, the gap is till considerable. The highest adjusted minimum wage was observed in Luxembourg and reached almost €2,000 per month, Bulgaria has the lowest at €260.80 per month. The Bulgarian rate is well behind the country with the second lowest rate, Romania, where minimum wage workers earn €407.30 per month

Minimum wage-setting remains a controversial topic of debate, and in many respects is seen as a double-edged sword. Mandatory minimum wage-setting is not harmful for employment if it closes the gap between actual wages and a worker’s productivity. It may even attract individuals to the job market who would otherwise remain inactive. But there are also concerns that if the minimum wage is too high, the positive effects on labour demand of higher labour incomes are offset by the negative effects on the employment of those with productivity below the minimum wage.