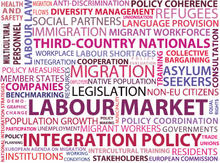 In recent decades, migration patterns in Europe have changed significantly. Moreover, increasing disparities between more- and less-developed countries have led to an increase in worldwide migration. Europe has become more attractive for migrants, and the numbers of third-country nationals arriving have grown. In more recent months, the situation in Europe has changed profoundly with the substantial inflow of refugees. Eurofound’s new study on migration, labour market and integration policy looks into the challenges this brings for the social partners.

Many EU countries are facing an unprecedented refugee inflow and have been grappling with how to deal with this ongoing situation. What is needed, however, is a comprehensive and coordinated response to address both the immediate needs of asylum seekers and the longer-term challenges of integration. The social partners have a significant input to make in this endeavour.

The social partners are not only an intrinsic part of the workplace but are involved in wider societal issues, which means they also have to deal with the growing challenges of a more diverse workforce and society. For the social partners, the issue of migration, and migrants as both workers and citizens, is an important but not always easy issue to address. It presents a number of challenges.

Asylum and refugees: Another external dimension is the influx of refugees into the EU. This challenge has been growing dramatically in recent months with the significant increase in the numbers arriving.

Wider integration of migrants: Although employment is a key avenue for overall integration, housing and education are also important factors. As trade unions in particular define themselves as organisations concerned both with direct labour market issues and with the wider society, they may be involved in issues related to integration of migrants.

Union membership: Inclusion of workers in trade unions is a normal objective of unions in minimising the effect of competition between organised and unorganised workers. However, the degree of interest in organising migrant workers may vary between countries.

Treatment of migrant interests: Trade unions usually base their actions and initiatives on the interests of their members as a whole, to maximise internal solidarity and to optimise their position in relation to employers. However, migrant workers may have specific needs and may require some tailored initiatives, albeit of a temporary nature. These may depend on cultural factors (language or religion), legal status (work permits) or structural conditions in the labour market (precarious employment).

In many countries, a broad range of stakeholders, including government, employers and, to a lesser extent, trade unions, cooperate to identify labour shortages and to inform broader third-country migration legislation, especially that relating to the labour market. Policy coordination takes place within different frameworks. The most common approach is employer needs analysis. Public employment services can also be a platform, as in Germany and Sweden. In some countries, particularly in central and eastern European countries, but also in Luxembourg and Spain, the tripartite mechanism has been identified as a platform for consultation. In other countries, the equal rights agenda serves as a framework for engagement.

The most widespread programmes supporting workplace integration are those related to language provision, both general language training and job-specific tuition. Trade unions are particularly active in this area in Italy and Malta. Other measures, for example, in Finland, Romania and Spain, focus on general training in the areas of labour law and health and safety.

The framework of anti-discrimination has been used by various social partners, especially trade unions, for the provision of programmes tailored to migrants’ needs. In Germany and Sweden, for instance, the social partners have implemented a range of programmes focusing on how to carry out non-discriminating recruitment processes, including analysis of competency needs, the choice of recruitment channels, the interview process, as well as other key steps in recruiting new staff.

The approach of social partners to gathering information about the migrant workforce seems to be sporadic and fragmented, and only a few countries do it systematically (Malta and Spain). The situation also varies within countries. In several countries, the social partners carried out ad hoc surveys aimed at learning more about their membership composition (Finland, Ireland and Italy).

As third-country migrant workers make up a growing share of the workforce in a number of sectors, the question arises as to whether trade unions have systems in place to increase membership among this group. Few trade unions have a strategic vision to increase unionisation among the migrant workforce. Two countries that are notable exceptions in this regard are Ireland and the UK, where unions have made a considerable effort to increase membership among this group. In some countries, measures have been implemented on an irregular basis. In most cases, initiatives are aimed directly at migrant workers rather than at simplifying internal union procedures and structures. Cost was cited by migrants as a barrier to joining a union, and formal language and internal procedures were also problematic. Furthermore, migrants flagged their lack of awareness of the benefits of being a union member.

Looking to the future

The social partners, along with policymakers and other stakeholders, will also have to reflect on how to react to and address the short-term and long-term impact of the recent influx of refugees to the EU. On 30 September 2015, the European Trade Union Confederation (ETUC) adopted an emergency motion ‘Refugee crisis in Europe’, in which it calls for a proactive European asylum policy that respects internationally agreed protection standards. It also argues that, when dealing with refugees, more emphasis should be placed on services that focus on social cohesion, such as employment and housing.

​Note: This article is drawn from Eurofound’s new report Challenges of policy coordination for third-country nationals.