The Youth Guarantee and beyond 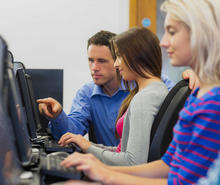 Europe’s young people have been exposed to poor labour market prospects in the majority of EU Member States as a consequence of the crisis, leaving the EU with an uphill struggle to reduce unemployment and get young people back into the labour market.

Since the Council adopted the Recommendation on establishing a Youth Guarantee in April 2013, Member States have been introducing structural reforms and new employment initiatives for young people, as set out in their Youth Guarantee operational programmes. These steps, with the help of funding from the Youth Employment Initiative and European Social Fund, have contributed to the recent fall in youth unemployment in the EU28.

Despite improvements in 2014–2015 in some Member States, many countries still report their highest youth unemployment rates ever. More than 50% of young people are still unemployed in Greece, more than 40% in Spain, Croatia and Italy, and more than 30% in Cyprus and Portugal.

The Youth Guarantee is an important step in fighting unemployment, and although first results are encouraging, the situation remains critical as 4.7 million young people aged 15–24 in the EU are still out of work (Eurostat data, May 2015). Policymakers recognise that the Youth Guarantee needs to be developed further and policies have to go beyond this framework to tackle social exclusion and bring about inclusive growth.

This was evident in the Luxembourg Presidency background note (550 KB PDF) for an informal meeting of Ministers of Employment, Social Affairs and Equal Opportunities held in Luxembourg on 16–17 July 2015. The focus of the working lunch of ministers of employment on 16 July was ‘Youth employment and job creation: Youth Guarantee and beyond’. Young people were represented by the European Youth Forum.

At the meeting, policymakers were asked to think about two complementary agendas crucial for a competitive Europe and improving access of young people to the labour market:

During the session, Eurofound Director Juan Menéndez-Valdés offered some initial lessons learned in the first year of implementation of the Youth Guarantee drawn from research in this area for an upcoming Eurofound report on Social inclusion of young people.

He highlighted that early intervention via the Youth Guarantee may limit the potential scarring effect of long-term unemployment on young people. However, during the first year of implementation, given the scale of youth unemployment, some Member States focused more attention on young people who are ‘job-ready’ and likely to be more easily reintegrated in the labour market. Therefore, further initiatives aimed at reaching out to hard-to-reach youth should be designed and implemented. The report is due to be published in autumn 2015.