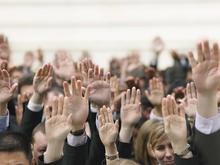 A new series of reports from Eurofound – launched on 7 November – looks in detail at a range of aspects of quality of life and the changes in these that have taken place as a result of the crisis. Three of the reports analyse findings from the third European Quality of Life Survey (EQLS), conducted in 2011–2012, and compare them with findings from the 2007 wave; they address the themes of subjective well-being, quality of society and public services, and social inequalities.

Some aspects of life and society in Europe have deteriorated, and more so for certain groups: the extent of material deprivation rose between 2007 and 2011, particularly for people with a limiting disability or health condition, the long-term unemployed and people aged between 50 and 64 years. Other aspects of society have weathered the storm: encouragingly, levels of trust in other people remain largely unchanged.

Taking an in-depth look at the survey data reveals some surprising findings: it emerges that harsh though material deprivation may be, it is the social aspects of such deprivation – not being able to invite guests over for dinner, for instance – that weigh  most heavily on people. And, given the pressure that economic circumstances can place upon people to move region or country in search of work, it is sobering to learn that while face-to-face contact with friends strongly improves well-being (as might be expected), indirect contact – on the phone or by email – has almost no positive impact.

The package of publications also contains two policy briefs; these use EQLS findings to explore policy options in the areas of the burden of informal debts in over-indebted households, and of political trust and civic engagement.

The first policy brief points out that much of the policy debate on over-indebtedness has focused on formal debts such as arrears on utility bills, rents or mortgages. However, when they urgently need money, most people in the EU say they would turn to relatives or friends.

Problems may arise in making payments related to these informal debts as well as to formal debts. Moreover, what may appear to be limited problems in formal debt arrears may mask more substantial informal arrears.

The second brief makes clear that, in most countries, trust in both national and European political institutions has eroded substantially since the onset of the economic crisis. Among EU residents trust in the EU used to stand at a considerably higher level than trust in their own national governments or parliaments, but this ‘surplus’ of trust has diminished in recent years.

Also this week, the OECD published the report How's Life? 2013: Measuring well-being. It finds that OECD countries have made much progress in many dimensions of well-being over the past two decades. However, this progress has been uneven across the dimensions measured and with considerable variation in progress between countries and between different population groups within countries. It records declines in life satisfaction, housing conditions and trust in governments over the period of the crisis, again with much variation between countries and population groups.