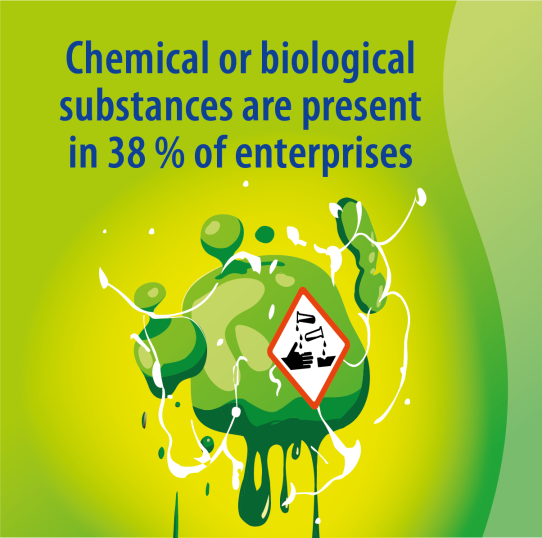 To mark annual World Day for Safety and Health at Work on 28 April, Anna Gallinat, Communications Project Officer, discusses Eurofound’s most recent evidence on safety and health in the workplace.

What happens if a factory worker falls and breaks her leg? What if the mental health of an administrator deteriorates over a long period due to poor working conditions? How can we prevent such incidents and promote a safe and healthy working environment in Europe?

The EU has been a global leader on these issues for almost three decades and has done a lot to improve policy and legislation around the health and safety of its workers. Back in 1989, it launched the directive on Safety and Health at Work (89/391/EEC), which

Saturday 28 April 2018 marks SafeDay, the annual World Day for Safety and Health at Work. For this occasion, Eurofound’s sister agency EU-OSHA has launched its new two-year campaign on managing dangerous substances, lasting throughout 2018 and 2019. A dangerous substance is any solid, liquid or gas that has the potential to cause damage to the safety or health of workers. Exposure can occur through inhalation, skin penetration or ingestion. Overall, 38 % of European enterprises report potentially dangerous chemical or biological substances in their workplaces.

What does the research say?

Eurofound’s 2015 European Working Conditions Survey (EWCS) has some good news on the health and safety of EU workers. It has found that employees’ exposure to tobacco smoke in the workplace has fallen greatly since 2005, undoubtedly due to legislation on smoking in workplaces in many countries. The survey also found slight improvements over the past decade regarding exposure to noise. However, exposure to chemical and infectious products in the workplace has actually increased since 2010, while there was no rise in posture-related or ambient risks. The researchers developed a biological and chemical risks index based on the data to measure exposure to inhaling smoke and toxic vapours and handling chemical products and infectious materials. Craft workers scored highest on this index, meaning they are at most risk, while clerks scored lowest.

Figure: Exposure to posture-related, ambient and biological and chemical risk indices (0–100), by country, 2015 According to the European Commission, fatalities associated with chemical substances accounted for almost half of all work-related deaths in 2008. New and emerging risks, which include nanomaterials and other factors linked to the development of biotechnologies, are of particular concern in this area.

Despite its good track record, therefore, the EU does not reach its full potential when it comes to health and safety. The EWCS shows that exposure to risk is structured according to gender, employment status and occupation. In particular, the EWCS looks at various aspects of job quality and how they relate to health and well-being. For instance, workers’ health is influenced by physical surroundings and physical demands (for example, exposure to noise, dust or chemical agents; or having to lift heavy loads) and social environment (such as support from colleagues) as well as the prospects one has for career progression.

And what is the EU’s response?

Similar to smoking legislation, which largely focuses on preventing diseases before they occur, the EU’s key approach is to improve the health and safety of workers by focusing on health promotion and prevention of disease or accidents. This links back to the initial EU directive of 1989 but also to the current EU Occupational Safety and Health Strategic Framework 2014–2020. This aims to improve how existing health and safety rules are put into practice as well as preventing work-related diseases by tackling new and emerging risks.

Furthermore, last November, the EU Member States, together with the European Parliament, the Council and the European Commission, formally proclaimed the European Pillar of Social Rights. This initiative reflects a joint commitment to providing healthy, safe and well-adapted work environments. It includes provisions on protection of workers’ health and safety at work, as well as to the adaptation of the working environment to enable workers to extend their working lives.

A healthy workforce is good for not only for the health of individual workers but also for national economies and European growth: healthy workers are more productive and the costs associated with, for example, presenteeism, care and insurance are lower. Achieving these goals will support the EU in maintaining its economic prowess and remaining a leader in the field of health and safety at work.