Are workers staying in jobs for less time? 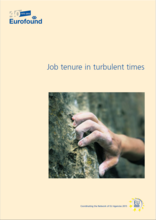 The view that the ‘job for life’ is a thing of the past is a commonplace. It comes, in part, from the sense that security in employment is decreasing. If employment stability is measured by the amount of time people spend in the same job (job tenure), it implies that tenure should be getting shorter. Is this actually happening?

On the surface, it appears not. The average worker in the EU stays in the same job for 123 months (10.3 years), according to 2012 Eurostat data, up from 116.5 months (9.7 years) in 2002. Part of the reason for this rise in tenure is the economic crisis. Workers became less willing to change jobs and stayed put for longer.

But that is not the whole story. The growing proportion of older workers in the workforce also had a big influence on rising tenure. Older workers have longer tenure: one further year of tenure is by definition one further year of age. Tenure would have actually decreased by two and a-half months if the age structure of the workforce had remained unchanged, meaning that an underlying trend towards shorter tenure may exist in Europe as a whole.

There is quite a lot variation across the countries of the EU. The continental European countries (Austria, Belgium, Denmark, Luxembourg and the Netherlands) and the Mediterranean countries in general have higher average tenure, while the central and eastern European countries as well as Ireland and the UK have lower tenure.

The legal framework protecting employment plays a part in these differences between countries: in general, the stronger the legal protections around employment, the longer tenure is. Ireland and the UK, for instance, protect employment to a lesser extent and have lower tenure. A higher prevalence of temporary contracts and, more generally, labour market flexibility are also linked to lower tenure.

Average tenure in the EU as a whole is longer for men than for women, partly because women work more in sectors where tenure is shorter, such as the hotels and restaurants sector. The gap has narrowed since 2002, however, due to the crisis having greater impact on male employment.

Much more detail on these findings is available in the Eurofound report Job tenure in turbulent times.