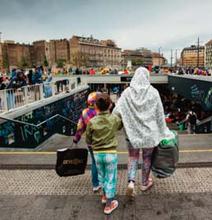 Migration from third countries is a major policy concern at national and European level. While it is dealt with in great detail for the purpose of introducing specific regulations, the overall architecture of migration-related policies is perceived as a challenge. This is particularly the case at present as the influx of refugees to the EU puts additional pressures on policymakers in managing the different strands of immigration flows.

The inward migration of non-EU citizens represented two-thirds of EU population growth in the past decade and half of the employment growth in the past five years. These figures will most likely increase as a result of the significant inflow of refugees in recent months.

Against this backdrop, one positive trend has been emerging in recent years: Member States are slowly starting to realise the need for greater coherence between immigrant integration policies and measures to attract migrants, while at the same time looking for more coordinated methods of addressing long-term integration issues.

Eurofound’s report on Challenges of policy coordination for third-country nationals shows that Member States have made progress in this area by involving a broad range of partners from different government ministries and departments at national, regional and local level, as well as other stakeholders, including civil society organisations, social partners and service providers.

In general, according to the findings, policy coordination has manifested itself in various ways. First, government attempts to attract more migrant workers have often been interlinked from the outset with both integration outcomes and economic competitiveness in mind. Secondly, some governments have implemented an approach to immigrant integration referred to as mainstreaming, which means they aim to reach people with an immigrant background through programmes and policies that also target the general population, such as the education system offered by employment services. Mainstreaming can be achieved by adapting governance structures both horizontally and vertically to improve coordination on integration goals or by adapting general policies to incorporate integration priorities into overall objectives.

However, a closer look at the links between migration, labour market and integration policies reveals an uneven patchwork of cooperation within the Member States that has sometimes led to a lack of coordination or a coherent approach.

A number of factors underpin successful policy coordination. Countries that promote a mix of both external vertical coordination (national, regional and local) and internal horizontal coordination (between various departments) tend to have better policy outcomes in terms of integration results. Likewise, maintaining policy coherence during implementation or programme coordination is key for reaching the objectives set. This applies to both internal and external coherence: internal coherence within the policy programme and among stakeholders – for example, maintaining a specific approach or strategy; and external coherence between different organisations – for example, good cooperation between national and local levels to adapt to any change in the overall strategy. Stability of institutions and their internal configuration also play a role in maintaining good policy coordination.

Putting in place a strong coordination centre (with sufficient resources) that can offer political support is crucial. In addition, in all policy coordination mechanisms, stakeholder commitment throughout each programme is important for its ultimate success.

The migrant’s role is an important element that needs to be taken into account in policy coordination. A successful outcome may depend on the involvement of migrants in consultations and the extent of their contribution. Their input is also important in setting the overall goals of the policy programme.

In designing their migration-related policies, Member States should think more holistically at the start of the process about the outcomes that go beyond the labour market and encompass integration; this could lead to better planning and yield better overall outcomes. Notwithstanding the challenges related to the overall policymaking and the governance structures that Member States face on a daily basis, it is important to maintain policy coherence and the stability of the process when implementing policy or programme coordination.

Note: This article is drawn from Eurofound’s new report Challenges of policy coordination for third-country nationals.