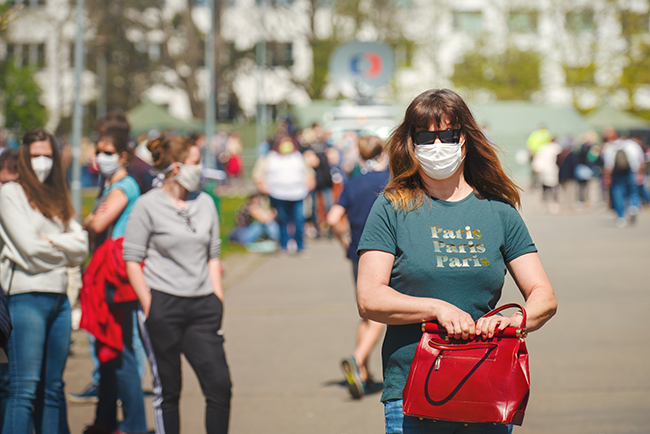 The impact of COVID-19 continues to create chaos in people’s lives across Europe and the world. The economy is heading towards another major dip, and a sense of general insecurity pervades. The daunting challenges confronting health services and projections on the long-term impact of the crisis dominate the discourse in the media – and with good reason.

But what do we actually know about how the pandemic is affecting us all? How are Europe’s citizens really experiencing this crisis, beyond the graphic drama of individual disease, death and macroeconomic concerns?

Eurofound has collected the experiences of over 60,000 citizens across all EU countries using a short online questionnaire and weighted their replies to reflect the structure of the EU population. The results show a Europe grappling to respond to the crisis, with many respondents reporting lower levels of well-being and optimism, growing feelings of insecurity, and increasing financial difficulties, coupled with job loss and a dramatic decrease in working time. It all paints a stark picture of people’s lives across the EU. But it also points to the subtle transformations that hide beneath the more simple and shocking statistics that abound.

Telework a partial solution, though with drawbacks

While we watch the daily hike in unemployment figures – and 6% of our respondents report having lost their jobs as a direct consequence of this crisis – the survey highlights the additional elements at play in the labour market: some 23% say they have lost contracts or jobs temporarily, and 50% report having had their working time reduced. Telework has protected some from the worst of the possible consequences, and it is indeed striking to see how ICT-enabled working has allowed many to cope much better than they would have imagined just a few months ago. Of the respondents, 37% report having started to telework as a response to this crisis, compared to around 17% who teleworked at least occasionally prior to the crisis. And this will probably imply a permanent change for the future.

But one should not underestimate the toll that this enforced home-working can take. Traditional shortcomings are becoming more evident, with work–life balance issues ratcheting upwards and one in five people (22%) who live with children under age 12 reporting difficulties in concentrating on their job, compared to just 5% of households with no children and 7% with children aged 12–17. The shift towards working from home is also further eroding the ever-thinning boundary between work and home, exacerbating tensions around the right to disconnect. It is clear that not all sectors or indeed occupations are suitable for this form of work. Nor are the situations of some individuals, for whom difficulties such as housing quality, extra caring responsibilities or the lack of a support network rule it out. Furthermore, not all workers, companies or regions can rely on the availability of appropriate equipment and infrastructure.

Significant toll on finances and well-being

The direct impact of the pandemic on household security is exposed by the survey results, with people’s financial security becoming a growing concern: 38% of respondents report that their financial situation has deteriorated, and over half (56%) say their savings are not sufficient to cover their needs beyond three months. The situation is particularly severe for self-employed and unemployed workers, as they report much higher levels of arrears than average on outgoings such as mortgage payments, rent and utility bills.

The implications are, of course, both intensely personal and immediate. A significant decline in subjective well-being is already apparent. Life satisfaction has dropped to 6.3 points (on a scale of 1 to 10), on average, from 7.0 points in 2016, when it was measured by Eurofound’s European Quality of Life Survey (EQLS). Happiness has fallen from 7.4 to 6.4 points. Levels of optimism are also, unsurprisingly, declining. Mental well-being has seen a sharp shock and is alarmingly low in some countries, such as France and Italy.

And, as in previous crises, young people are again more affected in some areas: 20% report having lost their jobs as a consequence of the COVID-19 crisis, compared to 6% of all respondents. One in 5 reports feeling lonely, compared with just 1 in 20 when they were surveyed in 2016 by the EQLS. Their psychological health is suffering too: they score lower on mental well-being than other age groups, and more report feeling downhearted and depressed.

As one would expect, governments and institutions have raced to adapt and to assist the economy and the most vulnerable in different ways. The EU has been at pains to try and establish a coherent, coordinated response and a follow-up plan of action. But how is this perceived by citizens?

Perhaps unsurprisingly, respondents report the highest levels of trust in those on the front line, like healthcare services and the police. In contrast, trust in both national governments and the EU appears to have declined, with levels of trust reported at 4.8 and 4.6, respectively, on a 1–10 scale. This following a boost to trust ratings in the aftermath of the recovery from the economic crisis. And trust in media is equally low.

These figures should be of particular concern to the EU. Lower levels of trust in the EU than in national governments is unusual and probably unjustified in many ways. Large-scale, unprecedented measures have been implemented; rapid and far-reaching decisions have been taken in a very short time. But still, it appears that the EU has been found wanting in some quarters, perhaps fuelled to some degree by perceived the lack of unity among Member States as well as the slow pace of decision-making by the European Council on a supranational problem that requires fast and united action.

But wherever the responsibility truly lies for the fall-off in trust, the impact on the individual is stark, particularly in some Member States. The situation in France, for example, is of serious concern, where reduced trust is accompanied by particularly low levels of life satisfaction, happiness, mental well-being and optimism. At the same time, close to 60% of French respondents report not having sufficient savings to manage without an income for three months. The situation for Italy, another founding member of the European Communities, is not much better. And especially alarming perhaps is the slump in trust among the traditionally strong supporters of the EU project, such as Spain, which now appears on the bottom rungs – registering the fourth lowest level of trust, just above France, Czechia and Greece.

These findings reflect just the initial response of Europeans reeling from yet another shock to Europe’s economy and its core. But the results are a timely alarm bell for all of us as we try to manage the recovery of a shell-shocked economy and to protect the most vulnerable in our societies. The feedback from this survey should serve as an imperative for policymakers to join forces. Working together in the face of a supranational calamity such as this one is the only solution.

Europeans are telling us they can accept nothing else.