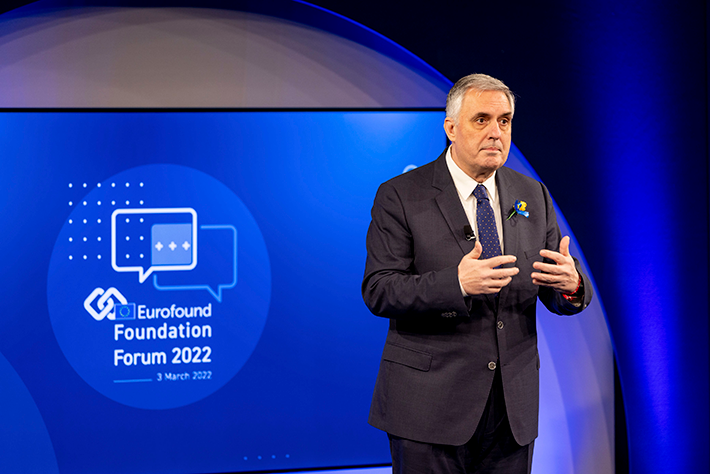 The dawn of 2022 brought muted optimism to a Europe beginning to emerge from the COVID-19 pandemic, and the progress of vaccination programmes worldwide brought hope. Government and EU support during the pandemic had kept unemployment at bay, averting the widescale collapse of businesses. In step with the EU’s plans for the year, Eurofound’s focus was firmly on a post-pandemic Europe: the recovery and the twin transition to a green and digital economy. All this changed with Russia’s invasion of Ukraine and the start of a war of aggression. The EU and its institutions were compelled to respond rapidly.

Against this background, Eurofound faced an immediate challenge: to adjust rapidly to combine our planned work on the recovery and the EU priorities of a digital and green transition with the new tasks of gathering data on the energy and cost of living crises fuelled by the war and the related wave of migration that increased pressure on public services. We had to be agile and react quickly, while maintaining robust analytical capacity, addressing the EU’s evolving challenges through the lens of our mandate to provide evidence on employment, social and work-related issues. A new section on our website, Stand with Ukraine, brought together Eurofound’s knowledge and material on all aspects related to the impact of the war. The landmark Living, working and COVID-19 e-survey was also adapted to include questions on Ukraine and Europe’s new reality of record high inflation and sharp rises in the cost of living. The EUPolicyWatch database was reworked to capture Member States’ responses to the new crisis, including measures and action to alleviate energy and food price hikes. Articles were published on the impact of the invasion of Ukraine and the mass migration of primarily women and children into the EU.

As the year progressed, the climate of rising inflation and its impact on low-wage earners saw Eurofound’s work on the minimum wage generate significant interest. Eurofound’s annual review of minimum wages in 2022 highlighted the grim finding that real minimum wages declined in most EU Member States. The publication of the report was timely, coming shortly after the political agreement on adequate minimum wages between the European Parliament and the Member States. In the context of the improvement of working conditions and job quality, Eurofound’s much-anticipated European Working Conditions Telephone Survey (EWCTS) was published in November. It revealed how, throughout the COVID-19 crisis, job quality had a positive impact on work–life balance, workers’ ability to make ends meet and greater trust within the workplace. Eurofound’s quadrennial 7th Foundation Forum in Dublin Castle took place as Russia’s war of aggression commenced in early March, and this served as a thought-provoking and important backdrop to the two-day discussions on how Europe can ensure lasting equality, inclusion and social cohesion as it embarks on a path to rebuild a greener, more digital and more resilient Union. With over 30 expert speakers, the hybrid event attracted over 10,000 viewers across all platforms and reached more than 75,000 people on Twitter alone, confirming Eurofound’s role as a centre of knowledge and research excellence. Nicolas Schmit, EU Commissioner for Jobs and Social Rights, took the opportunity of his participation in the Forum in Dublin to visit Eurofound and meet with staff. Top takeaways from the Forum and highlights are available online.

The continuing impact of the Great Recession and the pandemic on women was very much to the fore during this year, and International Women’s Day saw Eurofound join forces with the European Institute for Gender Equality (EIGE) on a number of activities, including a joint #AskTheExpert webinar and a dedicated podcast . The launch of the fifth wave of the Living, working and COVID-19 e-survey, a Europe-wide survey that would provide rich findings throughout the year also served to further highlight the gender divide at work and home and the changing structure of employment in the EU. Throughout the discussions on the Conference on the Future of Europe Eurofound was delighted to contribute actively, in particular to the Citizens' Dialogue event that took place in Dublin on 25-26 February 2022 which led to the conclusion of its work in May. Eurofound’s celebration of Europe Day on 9 May was especially poignant this year. It took place in the context of our focus on the challenges facing young people, as part of the European Year of Youth. But it was the young people themselves that were front and centre on Europe Day. Eurofound cooperated closely with its European and Irish partners to bring together Irish and Ukrainian students with representatives of the European institutions in Ireland, Irish politicians and the Ukrainian Ambassador to Ireland to discuss the concerns of Europe’s youth as well as to emphasise the EU’s fundamental values of human dignity, freedom, democracy, equality, the rule of law and human rights. Based on Eurofound ’s expertise in the area of youth, the Agency also formed key partnerships for activities during the European Year of Youth with other EU agencies, the European Commission and the International Labour Organization (ILO).

In addition, the European Commission’s flagship Employment and Social Rights Forum was a unique meeting point for decision-makers to discuss employment and social affairs issues. Eurofound was pleased to be part of the event to explore solutions for the future and to contribute specifically to the session on ensuring equal access to quality care services and the communication workshop on the Action Plan of the European Pillar of Social Rights.

With the return of face-to-face meetings, Eurofound continued to provide its expertise in a timely manner. The French and Czech Presidencies of the Council of the European Union called on Eurofound’s knowledge and drew on our support as input for ministerial and other meetings on various issues including social dialogue in the context of the move towards the green and digital transitions but also the impact of rising energy prices on the social situation of EU Member States. Throughout the year, Eurofound continued its planned research on collective bargaining, telework and restructuring trends in retail banking, delivering fully on its programmed output and publishing and contributing to a range of policy debates, meetings and events at EU and national levels. Europe Day’s young people brought welcome life to Eurofound’s corridors following the pandemic. They were one of over 20 groups to visit the Agency throughout the year, ranging from social partners to national governments and the EU institutions, including a delegation from the European Parliament’s Employment and Social Affairs Committee and Irish Minister for European Affairs. Eurofound’s Directorate was also honoured to have had the opportunity to visit President of Ireland Michael D. Higgins at Áras an Uachtaráin (the official residence of the President) for a detailed discussion on the Agency’s work. As the only EU agency based in Ireland, Eurofound’s relations with its host country are especially important and greatly valued. Work and cooperation with Irish partners intensified in 2022 as Ireland marked its 50 years of EU membership, with plans underway for events and celebrations through to 2023. Staying at the cutting edge of technological developments in our own work was critical in 2022, whether in data collection and management or communication. A digital approach remains a priority, and Eurofound’s online webinar series #EurofoundLive and #AsktheExpert continued to gain traction. Covering the high-profile issues of platform work, care and telework, these seminars provided a useful platform to facilitate debate between stakeholders. Ten carefully crafted podcasts were produced as part of the new podcast series #EurofoundTalks – a must-listen for fresh analysis and top takes from Eurofound experts on EU employment, social and work-related topics. To reach a wider audience, we also worked on presenting data in innovative formats, including data stories on a range of issues such as the energy crisis and cost of living increases. Monitoring the Agency’s performance is critical to achieving our objectives and despite continuing to face serious budgetary and other challenges throughout 2022, Eurofound delivered over 30 publications and various other outputs – surpassing our targets and achieving 97% programme delivery. In terms of uptake, our website recorded close to three million page views. Readership of our news material grew during the year, and engagement with stakeholders remained well on track.

But it’s clear that 2023 will be another challenging year, for many reasons: the economic, social and humanitarian crisis caused by Russia’s war of aggression against Ukraine; pressure on households and business from inflation and the rise in interest rates; the green transition and ongoing effects of climate change; and continued technological development. Eurofound will continue to research and monitor the impact of the war in Ukraine, dovetailing its plans closely with the EU agenda and the focus on the transition to a digital and carbon-neutral economy, the cost of living crisis, and the impact on living and working conditions. The support and encouragement from the EU institutions for Eurofound’s expertise has been especially motivating for colleagues during this difficult period alongside the positive relationship and excellent cooperation with stakeholders: social partners, national governments and the European institutions. The road ahead will be demanding, but Europe’s comprehensive responses to the many emerging threats have demonstrated its resilience in the face of adversity. Eurofound will continue to play its part in this endeavour.