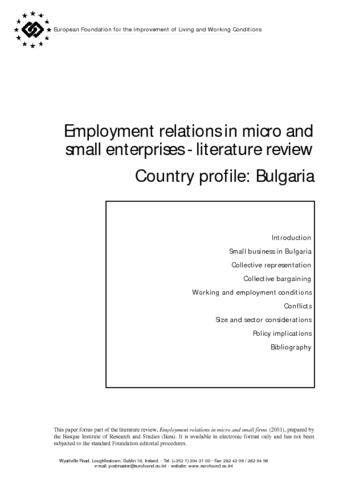 The new system of industrial relations started evolving in the early 1990s in Bulgaria. In March 1990, the National Assembly adopted the Law on Collective Labour Dispute Settlement, which laid the foundations of new collective labour relations. The amendments in the Labour Code from 1992 provided the legal foundations for the setting up of the tripartite partnership mechanisms aiming to better regulate the labour relations and to settle the collective labour disputes in the enterprises. This literature review examines small business in Bulgaria, including issues of collective representation and bargaining, working and employment conditions, arbitration procedures, size and sector considerations. It concludes with policy implications.