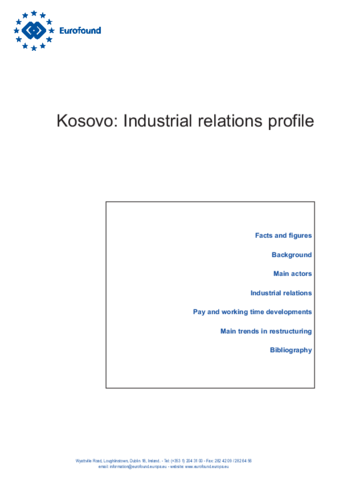 In 2010 the Kosovo legislative framework was changed by the introduction of one of the core laws in terms of labour relations – the Labour Law. This piece of legislation is considered to be one of the biggest achievements in post-1999 Kosovo in terms of labour relations as for the first time it codifies employer–employee relations and sets forth the inalienable rights of workers. While there are no accurate and reliable data on the impact that this law has had on the improvement of the situation of workers, or the level of implementation it has assumed, the law is considered to be a major milestone for the development of labour relations in Kosovo. Other pieces of legislation relating to social security and protection as well as industrial relations are expected to be enacted in the near future. A law on syndical organisation is also expected to be passed in the near future, hence opening doors for the development of trade unions in the private sector.
Useful? Interesting? Tell us what you think. Hide comments