Reform of old age pension and retirement systems in the EU 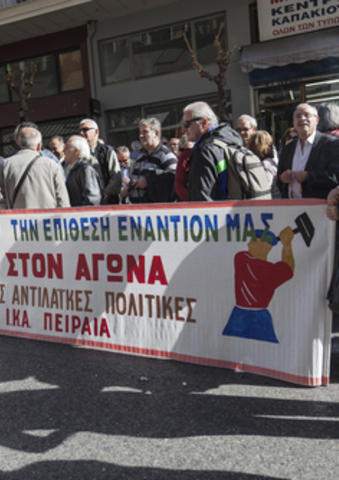 The need to reform pension systems is one of the key challenges for social policymakers in Europe. This article provides an update of how the EU 28 and Norway are tackling this issue in the face of demographic change, focusing in particular on the involvement of the social partneRead more

The need to reform pension systems is one of the key challenges for social policymakers in Europe. This article provides an update of how the EU 28 and Norway are tackling this issue in the face of demographic change, focusing in particular on the involvement of the social partners and governments.

As highlighted in a 2013 report by Eurofound, pension reform in the context of demographic ageing is one of the key challenges for the social partners in Europe.

Several countries introduced pension reforms more than a decade ago; however, the economic crisis and the ensuing debt crisis have prompted a further wave of reforms. These have largely concentrated on the sustainability of public pensions and on increasing the effective retirement age, with some changes proving very controversial.

A 2012 policy paper by the European Commission sets out possible initiatives Member States can take to promote longer working lives. The Commission also wants to encourage people to save more for their retirement through supplementary pension schemes.

Situation in Spain and Bulgaria

As reported in the Spanish business and finance newspaper Cinco Días, the reserve fund of the Spanish Social Security Institute fell by 22% (in Spanish) from €53,477.05 million at the end of 2013 to €41,634.22 million at the end of 2014. The number of pensioners has increased by one million since the financial crisis began in 2008: many people have retired early because of the crisis and, as elsewhere, people are living longer. Reserves were also depleted by the pensioners’ extra summer and Christmas wages. Cinco Días reports that the number of pensions being paid has risen significantly in the last six years. In 2008, the Ministry of Employment paid 8.33 million pensions to 7.58 pensioners (some people get more than one pension), whereas at the end of 2014 it was paying 9.27 million pensions to 8.42 million pensioners.

According to the Bulgarian National Statistics Institute, the number of people putting off retirement at 65 increased by 3.4% in 2014, an noticeable trend in recent years. Changes to the Social Security Code will mean that people who have not worked enough to claim a pension will be retiring at the age of 67 in 2029. However, the law will also allow people to retire on a reduced pension if they need only a year or less of working time to qualify.

In Estonia, the Ministry of Social Affairs has initiated a public consultation on the old age pension system and expects to propose changes at the beginning of 2016. A working group is discussing the following aspects:

In February 2015, the Deputy Minister for Social Security announced radical changes to the legislation on social security and pensions which will limit early retirement. According to the Ministry of Labour, these changes will not affect the following groups:

The government broke with tradition on this subject by not waiting for the social partners to discuss the subject and present a proposal. As the proposals have not yet become law, discussions can be expected in the Federal Parliament and there may be changes. However, the government has a majority and the reform is expected to pass. Nevertheless, the proposals have created unrest among the social partners who had planned bipartite bargaining meetings in April on the restructuring of the retirement system, and who now feel deprived of the chance to think out and agree a new system themselves. Usually, the government only intervenes when collective negotiations fail.

Proposals for reform were presented by the Bulgarian government in March 2015 and caused tension between ministers and the social partners. The government proposals included:

All the employers’ organisations are opposed to any increase in the number of people claiming social insurance and argue that loopholes in the system need to be closed.

The Croatian Government has proposed amending the Pension Insurance Act so that the payment of pension allowances for Homeland War veterans and their families would be split, based on years of pensionable service and veteran status. The government wished to delay this dual arrangement until June – it was scheduled to begin in January 2015 – in order to have time to determine which part of the pension is financed from contributions accrued from years of pensionable service and which from the state budget. Veterans' pension allowances would not be reduced.

The proposed amendments also specify in greater detail the time allowed for people to register as self-employed, and obliges employers to register workers eight days before they start work (workers who do not start on the date specified are obliged to notify the Croatian Pension Insurance Institute). The amendments also propose making insured members of same-sex partnerships eligible for a family pension. The Croatian parliament amended the Pension Insurance Act on 13 March  with the abovementioned stipulations. It guarantees those aged 60 and over with 41 years of service the right to an old-age pension without any reductions.

In the UK, on 25 February, the Fire Brigades Union (FBU) staged another 24 hour strike in its continued protest against pension reforms. The FBU is opposed to government plans to extend the retirement age of firefighters to 60 and to increase pension contributions. The FBU has also accused the government of misleading parliament over the issue of failed fitness tests and subsequent pension eligibility.

Italy and Norway have introduced legislation to change the retirement age. In Slovenia, the changes to its statutory retirement age and the economic incentives for late retirement came to force this year.

In March 2015, the Italian National Social Security Institute (INPS)  published new eligibility criteria for pensions; they cover requirements for seniority pensions (paid after a given number of years of service), the old age pension, and the early retirement pension (in Italian).

Due to changes in life expectancy, the pensionable age has generally been increased by four months as of 2016, as follows:

An extra four months has been added to the eligibility criteria for people who qualify for pensions based on a combination of length of service and age. The next new life expectancy adjustments will set the exact pensionable age from 2019.

The main trade union confederations – the General Italian Confederation of Labour (CGIL), the Confederation of Trade Unions in Italy (CISL) and the Italian Labour Union (UIL) –  stressed the need for reform of the social security system to make the criteria for claiming a pension more flexible, depending on a person’s job. The Government responded positively to union proposals to consider a new regulation to allow young workers to join the Italian pension system, and to make it easier for temporary workers to bank enough working time to reach pensionable age. The Government said the idea of flexible requirements could be settled in the next Stability Law, and that there would be discussions about reforming the Italian pension system, especially in relation to early retirement.

The Norwegian Working Environment Act has already been amended to raise the age at which employers can terminate a worker's employment contract from 70 to 72. However, the Minister of Labour and Social Affairs has announced that he plans to raise the threshold further to 75. Company guidelines cannot now be lower than 70 years, raised from the previous 67.

The amendment has been opposed by the main employers' organisation, the Confederation of Norwegian Enterprise (NHO), and by the Norwegian Confederation of Trade Unions (LO). NHO agrees that people should stay in work longer but says the focus should be on those retiring before they turn 70 rather than those above the age of 70 who want to continue to work. LO fears that raising the forced retirement age will cause more conflict between employees and their employers about when they can retire.

The rise in statutory retirement age and the introduction of economic incentives for retiring at a later age came into force in Slovenia earlier this year. However, the Organisation for Economic Cooperation and Development (OECD) recommended in its 2015 report on Slovenia that the government should introduce more radical reform to employment protection, the pension system, wages, tertiary education and the privatisation process. The association of free trade unions of Slovenia (ZSSS) criticised the OECD suggestions, saying they were illogical and didn’t take into account changes that had already been implemented. ZSSS said it was satisfied that the social partners had agreed there should be no further pension reforms before 2020 (in Slovenian).

Across the countries surveyed in this report, measures are being taken to guarantee the financial sustainability of pension systems. However, the exact form of these measures is often an issue of discussion between the social partners.

This article is mainly based on contributions from Eurofound’s network of European correspondents relating to the first quarter of 2015.

Further resources on individual employment relations can be obtained from the EurWORK homepage.