How is the Youth Guarantee being rolled out? 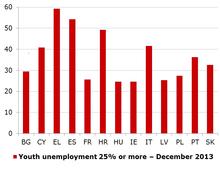 Implementing the European Youth Guarantee in the EU is a massive challenge for Member States. Government and social partners recognise the need for earlier intervention in preventing youth unemployment, lowering the number of young people not in employment, education or training (NEETs) and adopting a more collaborative approach in tackling the very difficult situation facing Europe’s young people. Action is underway and with youth unemployment declining in some Member States, things appear to be moving in a positive direction.

It is hoped that the Youth Guarantee will contribute to attaining some of the Europe 2020 objectives: a 75% employment rate of the population aged 20–64; rates of early school-leaving below 10%; and lifting 20 million people out of poverty and social exclusion.

In April 2013, EU ministers adopted a Council recommendation on establishing a Youth Guarantee (736 KB PDF) with the aim of getting young people under the age of 25 into employment, education or training within four months of becoming unemployed or leaving formal education. Since then, the EU Member States have been finalising their Youth Guarantee Implementation Plans and so far, according to a press release by the European Commission, 17 countries have submitted plans. These include Belgium, Bulgaria, Croatia, Cyprus, Czech Republic, France, Greece, Hungary, Ireland, Italy, Latvia, Lithuania, Poland, Portugal, Romania, Spain and Sweden.

The Youth Guarantee and other measures to tackle youth unemployment will be co-financed by the European Social Fund (ESF). But those countries with a high number of NEETs and very high youth unemployment – that is, rates in certain areas above 25% – will receive additional support from the Youth Employment Initiative (YEI). This group of 20 countries, which includes Ireland (24.6% youth unemployment), Greece (59.2%), Italy (41.6%), Portugal (36.3%) and Spain (54.3%) (Eurostat, December 2013), was required to submit their implementation plans by the end of 2013. Three were still outstanding by mid January (Slovakia, Slovenia and the UK). The remaining seven Member States not eligible for this funding have until early 2014 to submit plans – Austria, Denmark, Estonia, Finland, Germany, Luxembourg, Malta and the Netherlands.

While the Commission assesses the implementation plans already submitted, and provides feedback in due course, Member States are pressing on in preparing their operational programmes. These programmes will specify where each Member States plans to target the ESF and YEI funding over the course of 2014–2020.

It is obvious that the cost of implementing youth guarantee schemes is huge, but as Eurofound estimates have shown the cost of inaction is much higher, with NEETs estimated to cost the European taxpayer €153 billion a year, not to mention the knock-on cost to individuals and the wider society.

Member States will look to the experiences of youth guarantee schemes in Finland and Sweden which have already been explored by Eurofound research.

Continuing the process of dialogue on youth issues and how young people can contribute, a number of recent events have marked the importance of youth issues on the policy agenda. For example, the ‘European young leaders: 40 under 40’ group, led by EuropaNova and Friends of Europe, met on 31 January in Brussels to contribute ideas on topics like the role of young voters in European election campaigns, the EU’s impending leadership change and the EU’s energy policy, among others. On 5 February, in the UK, the 8th Annual National NEET Conference 2014 focused on how to ‘Engage, enable, empower and employ NEETs’.