Harnessing the crowd – A new form of employment 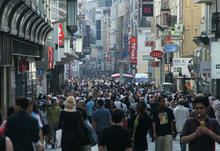 A new type of outsourcing has emerged in the past decade thanks to the internet, known variously as crowd employment, crowd working or crowd sourcing. The basic idea is that a client (the ‘employer’) posts a task on an internet platform and selects from a virtual pool of workers who express an interest in doing the task. On some platforms, workers pitch proposals to the client and the client selects from these.

The platform manages the relationship between client and worker, charging a fee for its services. In some cases, these services go beyond matching supply and demand to include vetting applicants or supporting clients in drafting their requests.

Amazon Mechanical Turk (an offshoot of the US internet retailer Amazon.com) is probably the biggest platform, with 350,000 tasks on offer any point in time. A number of smaller operators have sprung up across Europe, such as Clickworker (Germany), Boblr (Denmark), Lingjob (Lithuania) and Adtriboo.com (Spain). These are still early in their development, but the size of Mechanical Turk’s marketplace for work shows the potential for growth.

A lot of crowd employment involves micro tasks – simple, piecemeal, monotonous tasks such as image tagging, data entry, audio transcription and answering surveys. Crowd workers are even paid to ‘like’ products on Facebook. Other platforms offer opportunities to do more substantial and creative work. On Adtriboo.com, the most common tasks advertised include corporate image design, video production and creative writing.

This type of work is not covered by labour law. The relationship between the client and the worker is usually based on individual agreement, so pay, working conditions and other issues, notably intellectual property rights, are determined either by the two parties or the terms and conditions of the platform.

Crowd workers in Europe tend to be young, well-educated people who use it as a source of additional income. It offers flexibility – people can pick up work when they choose and work on tasks at home in their free time. Micro tasks typically attract students, unemployed people and workers on parental leave.

This is not all about the money. For young professionals starting out, some platforms provide them with an opportunity to showcase their ideas and test the reaction of potential employers. This can be valuable experience, even if they don’t win the competition for a given task.

The spread of crowd employment has been hampered by a lack of platforms and uncertainties around the new concept. There is also lack of awareness that such platforms exist; particularly in the start-up phase, word-of-mouth promotion through networks and social media is crucial. However, it is growing fast and could soon in Europe become a common way to get certain types of work done.