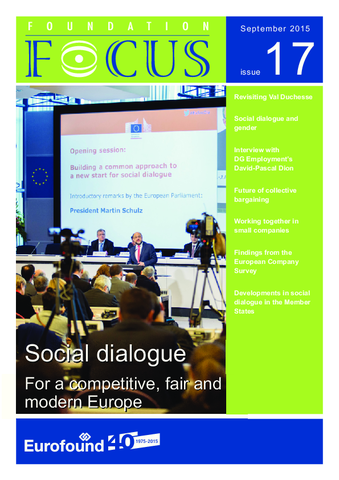 Social dialogue is a key part of the European social model, with European social dialogue having been launched at the historic Val Duchesse meeting 30 years ago. However, since then, established approaches to social dialogue in Europe have been challenged by industrial and social change. Ongoing shifts towards greater decentralisation of collective bargaining have resulted in a polarisation of Member States and the crisis has resulted in an increased trend towards unilateral decision making by governments at the expense of social partners’ autonomy. In response to these challenges, the new Juncker Commission has set about a ‘relaunching’ of social dialogue. This issue of Foundation Focus looks at the current state of play of social dialogue in Europe, focusing in particular on Eurofound’s extensive research findings from both its Europe-wide surveys and its observatories.